What About Those Earrings?


Nineteen forties hairstyles was a primary concern for the cover photos for my Promise For Tomorrow books. What may not be obviously historically wrong is the fact that all three women have pierced ears. 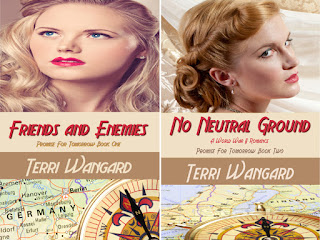 Ear piercing has been performed since ancient times. They’re mentioned in the Bible.
Earrings for women have been in and out of fashion in Europe. When hair and clothing obscured the ears, they lost popularity. During the 16th century, they were more common among men than women. In England, earrings were typically worn in one ear only.
In the western world, ear piercing was popular for women in Victorian times, but lost favor in the early 1900s when screw-back earrings were invented, eliminating the need for piercing. In the 1930s, cheaper clip-on earrings became the rage. During the years of World War II, very few women had pierced ears.
In 1951, Princess Elizabeth (the future queen) had her ears pierced in September, 1951, to be able to wear a pair of pierced earrings she’d received as a gift. Women took note and followed her lead. Within a few years, however, interest dropped, and once again piercing became rare. Not until the late 1960s did piercings revive with the hippie generation.
During the 1970s, interest increased dramatically among women with the invention of the piercing gun. Piercing became a rite of passage for teen-aged girls, and older women chose to pierce their ears because clip-ons do hurt.
Today, the great majority of Western women (around 95%) have pierced ears. In my local writers group, I noted only one other woman besides me with unpierced ears. Why don’t I pierce my ears? I abhor needles. Have you had your ears pierced? Why or why not? 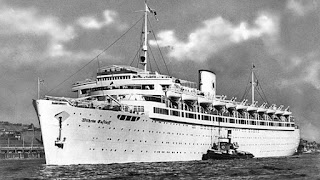 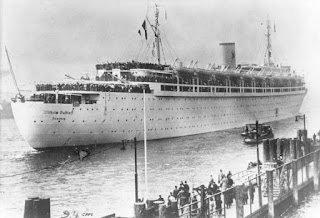 
Many Hollywood actors served in the military during World War II. Some, like Jimmy Stewart and Clark Gable, took part in combat. Others were active stateside in public relations work. Among them was Ronald Reagan. When he was called up, he’d been filming Desperate Journey. His scenes were hurriedly filmed before he left.

Reagan had completed a series of home-study Army Extension Courses in 1935 and enlisted in the Army Enlisted Reserve in 1937. He became a private assigned to Troop B, 322nd Cavalry at Des Moines, Iowa. Two months later, he was appointed Second Lieutenant in the Officers Reserve Corps of the cavalry.  He had just moved to Los Angeles to begin his film career when he accepted the commission and was assigned to the 323rd Cavalry.
Lieutenant Reagan was ordered to active duty on 19 April 1942. Poor eyesight got him classified for limited service only, and kept him from serving overseas. In June, he transferred to the Army Air Force, and subsequently to the 1st Motion Picture Unit in Culver City, California. A year later, he was promoted to Captain. 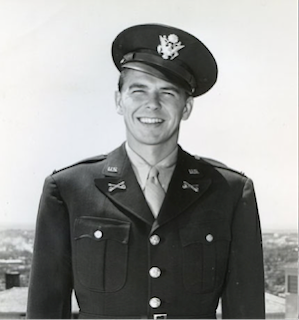 By the end of the war, his units had produced some 400 training films for the Army Air Forces. He separated from active duty in December of 1945.
How much do you remember Ronald Reagan? The latest book I’ve read is Lessons My Father Taught Me: The Strength, Integrity, and Faith of Ronald Reagan by Michael Reagan. I remember many events of the Reagan presidency, but here’s an insider’s account of behind-the-scenes happenings. It was illuminating.
I hadn’t known Ronald Reagan and Jane Wyman lost a premature daughter, Christine, which was a contributing factor to their divorce.
At the same time, in the years after World War II, communists tried to control Hollywood in a strike. Reagan was one of three reps for the Screen Actors Guild to negotiate. That led to his primary motivation to be president—so he could fight and defeat Soviet communism.
I remember the flap about Reagan taking naps, and was amused to learn he cultivated that image to lull opponents into underestimating him.
Michael Reagan believes his father didn’t win the Republican nomination in 1976 because none of his allies—Margaret Thatcher, Pope John Paul II, and others—were in place. 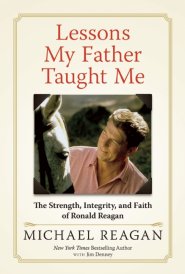 This is an insightful book that I recommend.

No Neutral Ground is Now Available!


Today is release day for No Neutral Ground, the second book of my Promise For Tomorrow series. Get to know Jennie Lindquist, one of the stars of No Neutral Ground. You can order it now on my Books page.

You traveled overseas in 1944. What did you do in the war years before that?
I worked at the Chicago art museum where I put together special exhibits like “Art in War: American Artists’ Record of War and Defense.” I also conducted tours through the museum for school groups.

What prompted you to go overseas?
Rumors of layoffs swirled around the museum, with the understanding that the last hired would be the first fired. I don’t know how true the rumors were, but my dad saw them as an opportunity to spread my wings and go to Sweden, where he was a military attaché.
My boss at the museum thought that was a great idea. He said, “Sweden is one of very few countries escaping the destruction of war. It represents a unique opportunity to be near the conflict but not involved. Think of it. You could have a ringside seat.”
Being ringside to a vicious war didn’t sound appealing, but he also said I could scout out possible exhibitions for after the war. Other countries wouldn’t be able to take part in exchanges, what with the mess they were in and their art stolen or destroyed. The possibility of scouting for the museum was enticing, and a job would be waiting for me when I returned.

Were you aware of what was happening to museums in occupied Europe?
Yes. We knew works of art had been taken from France, Belgium, and other occupied countries to Germany for what the Germans called safekeeping. An anonymous French museum official says they were quite capable of caring for their artwork, and they had grave fears of ever seeing it again. The Germans just took whatever they wanted.

You traveled across the Atlantic on the Queen Mary. Were you concerned about submarines?
By 1944, the U-boats weren’t having the success they enjoyed earlier in the war. Both of the Queens were supposed to travel so fast, the U-boats couldn’t set up a shot. I never heard of either ship having a torpedo fired in their direction. That gave me confidence I wouldn’t have had if I’d traveled on a Liberty ship.

How did you like being one of few women among all the troops making the crossing?
Over twelve thousand servicemen packed in, plus the nurses in a few medical units. But you know, being so crowded made it safer for us. There was no privacy. No man could be improper toward us without someone to rescue us.

You managed to have a shipboard romance.
Oh, I wouldn’t call it a romance. Rafe and I did spend a lot of time together, and I hoped to see him again after the war. I wondered about him often. Being part of a B-17 crew was so dangerous. And then his plane crashed in Sweden and there he was, covered in blood. My heart stood still.

You had a brief but intense training course for the OSS. You saw no danger there?
I was convinced I’d work behind the scenes. And I was going to Sweden. That was hugely different from being an agent in Germany. Still, when I was assigned to leave the legation and meet with agents, I definitely had qualms. Not until Rafe joined me did I start to enjoy our outings. They could still be nerve-wracking, but Rafe made it fun. Of course, as a former German national, the war was very personal for him.

Do you have any misgivings about Rafe being from Germany?
Never. I knew the day we met that he was angry with the Germans and with his father for rejecting him and the rest of their family because of Jewish ancestry. It hurt him to see Germany being destroyed. By war’s end, he came to understand how his father had been unable to cope with the belligerence of the Nazis. How would any of us react if we’d with a government turned so vicious? I’m so glad we found Rafe’s father in Cologne after the war and their relationship began to heal. Remembering their embrace still brings tears to my eyes.