The Tragedy of the Cap Arcona 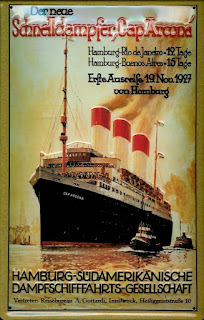 The Cap Arcona, launched in May 1927, was a passenger ship of the “Hamburg-South America” line. South American vacations were popular in Germany. Until the outbreak of war in 1939, the Cap Arcona had sailed regularly between Hamburg and Rio de Janeiro.
During the war years, the ship served as a floating naval barracks in Gotenhafen, near Danzig on what is now the Polish coast. With no upkeep, it was rusting, and the engines barely functioned. The ship was hardly seaworthy.
At the war’s end, thousands of refugees fled from areas in the east threatened by the Red Army. Admiral Karl Dönitz organized a vast rescue operation, and the Cap Arcona was drafted to take part, even though its engines . All but unknown in the United States today, this great undertaking saved countless lives. The Thielbek, a much smaller ship of 2,800 gross registered tons, was also used to transport refugees as part of the rescue operation.
In April 1945, the Cap Arcona and the Thielbek were ordered to Neustadt Bay in the Baltic Sea near the north German city of Lübeck. Over 5,000 prisoners hastily evacuated from the Neuengamme concentration camp (near Hamburg) were brought on board the Cap Arcona between April 18 and 26, along with some 400 SS guards, a naval gunnery detail of 500, and a crew of 76. The Thielbek took on some 2,800 Neuengamme prisoners. Under the terrible conditions that prevailed in what remained of unoccupied Germany during those final weeks, conditions for the prisoners on board the two vessels were dreadful. Many of the tightly packed inmates were ill, and both food and water were in very short supply.
On the afternoon of May 3, 1945, British “Typhoon” fighter-bombers, striking in several attack waves, bombarded and fired on the Cap Arcona and then the Thielbek. The two ships, which had no military function or mission, were flying many large white flags. “The hoisting of white flags proved useless,” notes the Encyclopedia of the Third Reich. The attacks were thus violations of international law, for which – if Britain and not Germany had been the vanquished power – British pilots and their commanders could have been punished and even executed as “war criminals.”
The Thielbek, struck by rockets, bombs and machine gun fire, sank in just 15-20 minutes. British planes then fired on terror-stricken survivors who were struggling in rescue boats or thrashing in the cold sea. Nearly everyone on board the Thielbek perished quickly, including nearly all the SS guards, ship’s officers and crew members. Only about 50 of the prisoners survived. 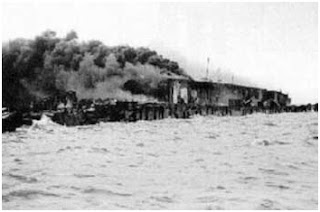 The burning Cap Arcona took longer to go under. Many inmates perished in the fires. Most of those who were able to leap overboard drowned in the cold sea, and only some 350-500 could be rescued. Many of those who made it to shore were shot or clubbed to death by Nazi patrols or naval cadets. During the next several days, hundreds of corpses washed up on nearby shores, and were buried in mass graves. Having sunk in shallow water, the wreck of the capsized Cap Arcona remained partially above water as a grim reminder of the catastrophe.
The deaths on May 3, 1945, of some 7,000 concentration camp prisoners – victims of the British attack – remains little-known. Why did the British attack the ships? They had been notified that the ships held prisoners. But RAF personnel failed to pass the word along to the pilots. The pilots didn’t learn what they had actually done until decades later.
The Cap Arcona, which portrayed the Titanic in the German propaganda film, was a far worse disaster than the 1912 sinking, which claimed only 1,517 lives.
Posted by Terri at 12:00 AM No comments:


Josef Goebbels was a failed writer and Adolf Hitler was a failed artist, but they saw themselves as film connoisseurs. They saw as many films as possible, many of which were not permissible in Nazi Germany because of Goebbels’ censorship laws.
Goebbels noted that American action and dramatic films were far more successful than those his propaganda ministry produced. Films like Casablanca, a blockbuster that gave a negative image of the Nazis. He recognized that his propaganda efforts were too heavy handed and obvious in their message.
After much study of American films, he decided he would create a Hollywood on the Rhine. And since the American film industry was populated by many successful Jewish directors, actors, producers, and scriptwriters, his films would be superior. 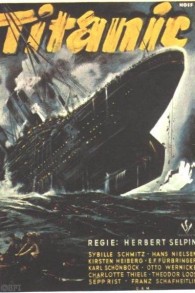 German screenwriter Harald Bratt wanted to create a movie based on Josef Pelz von Felinau’s 1936 book, Titanic: Tragedy of an Ocean Liner. Goebbels heartily approved. Their film would embarrass and demoralize the British, tarnishing their reputation and isolating them from the international community.
Goebbels’ epic film featured stunning special effects, lavishly done by director Herbert Selpin. The best actors and crew in Germany were recruited. The cast portrayed greedy, corrupt British capitalists, self-serving officers, cowardly first class passengers, and ethnic stereotypes.
Curiously, a lone German named Petersen was a member of the all-English ship’s crew. He alone continually cautioned against speeding through the ice fields of the North Atlantic. White Star Line head Bruce Ismay was portrayed as offering the captain thousands of dollars for every hour he arrived in New York ahead of schedule. His investors toasted him as a genius and rushed to telegraph their orders to buy up all the shares they could get.
As the ship sank, Petersen heroically rescued passengers, including Ismay, so he could be prosecuted for his crimes.
Despite a war going on, scenes were shot on location on the Baltic coast. The German liner Cap Arcona, in use as a floating barracks, had been inspired by the Titanic and built in 1927. It was quickly refurbished to portray its mentor.  Even though the war was turning against Germany, sailors were pulled off duty to serve as extras in the filming.

The filming ran behind schedule and way over budget. Goebbels finally screened his masterpiece on December 17, 1942. He judged it a catastrophe. While intended to portray Britain as a nation of idiots, it closely mirrored Germany as the sinking ship under the command of a fool. And the graphic sinking scenes might offend families of German sailors lost in the war.
Goebbels banned his pet project. Despite all the pre-release hype, it was not shown in Germany. Eventually, it was shown outside of Germany in occupied territory and neutral nations. Audiences deemed it well-made.
And in 1958, a British film company producing Walter Lord’s A Night to Remember used the German footage of the climatic sinking scenes because of the quality and realism.

Recommended Reading: The Nazi Titanic: The Incredible Untold Story of a Doomed Ship in World War II by Robert P. Watson. 2016
Posted by Terri at 12:00 AM No comments:

Whenever we visited my grandparents while I was growing up, my sister, brother, and I would each receive a little bag of M&Ms. I liked the red ones. Today, Linda Shenton Matchett shares the history of those delectable treats.
M&Ms and WWII

“Melts in your mouth, not in your hand!”


Most of us are old enough to remember that advertising slogan for the M&Ms, but few people know the origins of the hard-shell candy.


Franklin Mars started producing chocolates in his Tacoma, Washington kitchen in the early 1900s, then founded the Mars Candy Factory in 1911. By 1920, the company failed, and Frank returned to Minnesota where he tried his hand at candy production again. Success came slowly until the creation of the Milky Way bar in 1923, inspired by popular milkshakes of the time. The bar quickly became the best-selling bar on the market.

Frank’s son, Forrest, joined his father in the company, but by 1932 a disagreement about whether to take the company overseas caused a rift between the two men. Forrest allowed his father to buy him out, and he moved to England where he worked for Nestle and the Tobler Company.


In the days before refrigeration, the chocolate business slumped during the hot months of summer. Legend has it that Forrest encountered soldiers during the Spanish Civil War who were eating bits of chocolate covered in a sugar shell. Realizing he had found a solution to the heat issue, he returned to the U.S. and partnered with Bruce Murrie, son of Hershey executive William Murrie. The two quickly went to work and devised a manufacturing process for which they received a patent in 1941.

The candies, named M&M in honor of the two founders, were sold exclusively to the military during WWII as an item included in the troop’s ration packs. The candy was heat-resistant and easy to transport. No matter where the men were stationed, they could count on their chocolate being in factory fresh condition. By war’s end, the men were hooked and anxious to purchase the item on the civilian market. Needless to say, the Mars Company complied.

Today, Mars produced over 400 million M&Ms each day. The colors have changed, and variations offered (peanut, crispy, etc.), but M&Ms remain one of the most popular candy treats in the world.
Posted by Terri at 12:00 AM 1 comment: