Is There a Worst WWII Photo?


World War II was photographed from every imaginable angle. Some heartwarming photos, some devastating, some thrilling, some shocking. What’s the worst photograph you’ve seen? 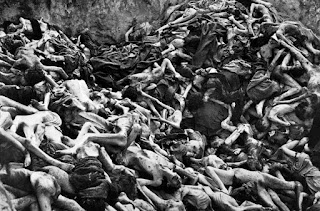 Hundreds of photos exist of the concentration camps. Piles of dead reduced to skin and bone. Impossible to wrap the mind around the bestiality. 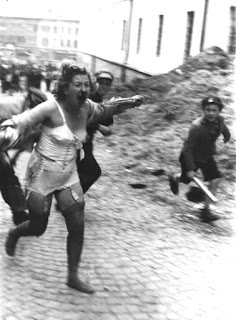 One on one cruelty. Neighbor turning against neighbor. Children attacking adults for no good reason. Here, Young Ukrainian boys with wooden clubs chase a battered, bloodied Jewish woman during the Lviv pogroms in 1941. Did their mothers know what they did? Did they approve? 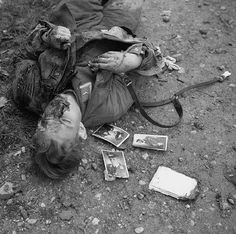 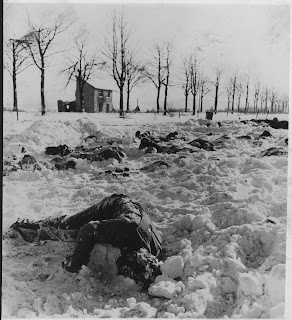 Battlefield scenes show bodies torn apart. Weapons were created solely to kill, to maim. They did their job frightfully well. 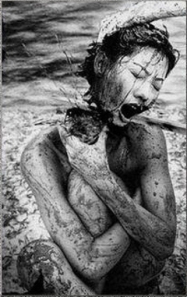 A Chinese woman and her baby are beheaded with a samurai sword during the Rape of Nanking.

A Japanese bayoneting of a baby during the Nanking Massacre. 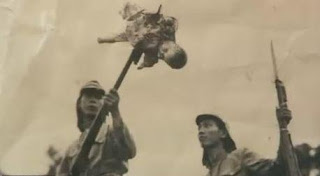 And then there are the children. Innocent, vulnerable children. How could they hurt the children?
“See that you do not despise one of these little ones. For I tell you that their angels in heaven always see the face of my Father in heaven. Matthew 18:10
Posted by Terri at 12:00 AM No comments:


At 12:43 am on July 5, 1943, a Japanese torpedo struck the USS Strong in the South Pacific, tearing open a 30’ x 20’ hole on the port side. The destroyer sank fast. Two hundred forty-one men were taken aboard the Chevalier before the second destroyer needed to get away from enemy shelling.
Lieutenant Hugh Miller went over the side and was dragged down in the suction of Strong’s sinking. He bobbed back to the surface when “a giant’s fist crushed his abdomen,” his head almost wrenched from his neck. The sea roiled and bubbled as though a volcano had erupted.
The ship’s depth charges had been jarred out of “safe” mode by the impact of the torpedo, and the depth setting dial rotated to the fifty foot mark. With the ship buckling, not all of the depth charges could be reached to re-safe them. Ninety seconds after submerging, a depth charge exploded.
Three hundred pounds of TNT sent out a spherical shock wave at five thousand feet per second. Depth charges are intended to open seams of submerged submarine’s reinforced steel pressure hulls. Any person within fifty to seventy-five feet of the explosion would simply disintegrate.
Out to a distance of three to five hundred feet, serious injury is inevitable. Gas-filled organs are particularly susceptible. Damage to intestines, hemorrhaging, broken ribs or limbs, and severe concussions are typical. Seamen are told to get to the surface quickly, move away from their sinking ship, turn on their backs, keep legs firmly together, and clench their buttocks.
Lt. Miller was in an upright position one hundred feet from the depth charge. The sinking hull sections between them diverted some of the shock wave. He felt immediate intense pain in his abdomen, his legs paralyzed. Pulled onto a floater net, he writhed in agony, moaning out loud, and teetered on the edge of unconsciousness. He was given a shot of morphine.
Through the next days, he vomited fuel oil and seawater. His abdomen was painfully distended and still wracked by savage pain. He passed blood from the rectum, and had difficulty breathing due to damage to his lungs and diaphragm. 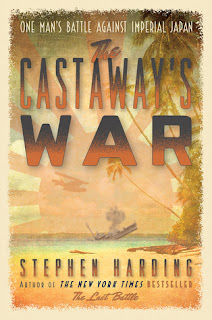 Just after midnight on July 9, the net came to Arundel Island. His companions found coconuts. Miller drank the juice, but couldn’t keep down the coconut meat. He still suffered crippling intestinal pain and periods of unconsciousness. With difficulty, he walked in an awkward hunch.
By the morning of the 15th, the slightest touch to his grossly distended abdomen caused nausea. He could still not eat solid food, vomiting blood and oil. He ran a high fever and was utterly weak. Believing he was dying, he ordered the three sailors with him to go on, and gave one his shoes.
By the 19th, he was feeling better. While his abdomen was still tender, he no longer passed blood. He was actually hungry. After a week of building up his strength and stamina, fueled by coconut meat and fresh water, he set out to gather intelligence on enemy strength and routines, and played a deadly game of hide and seek with Japanese patrols. He wiped out patrols and machine gun crews with their own grenades.
Forty-three days after the sinking, he was rescued on August 15th. He was awarded the Navy Cross for his actions as a one-man army.
In 1945, intestinal difficulties manifested again. Being very careful of what and how much he ate prevented severe cramping and diarrhea. Chronic irritable colon health problems would plague him for the rest of his life. In 1978, during surgery for an abdominal aortic aneurysm, he was found to be riddled with widely spread metastatic carcinoma, cancer from either immersion blast trauma or his lifelong smoking habit, or both. Miller died scant weeks later.

The Castaway’s War: One Man's Battle against Imperial Japan by Stephen Harding releases in May.