After Heidi Neumark’s father’s death, she learned he was Jewish. He left Germany in 1938, and his parents ended up in Theresienstadt concentration camp. His father perished there, and his mother got out in February, 1945, when 1,200 Jews were released to go to Switzerland.
Twelve hundred Jews were set free? How did that happen?
In her book, Hidden Inheritance, Heidi notes that the former Swiss president, Jean-Marie Musy, concerned about favoring the losing side in the war, approached SS Chief Heinrich Himmler about releasing the Jews. He agreed, if one million Deutsch Marks were put in a Swiss bank account for him. One train left Theresienstadt when Hitler learned about it and put a stop to the freedom trains.
I dug a little deeper. Despite being little known, 1,200 Jews did receive freedom, and life, before the war’s end. Details get a bit murky. Was the United States involved? Did thousands more survive because Himmler ordered the end of gassing in November, 1944?
Musy had known Himmler since the 1930s, and had been the publisher of a pro-German newspaper. During that time, he favored the removal of Jews from economic and public life. By 1944, he had reversed his position, stopped his publication, and decided that the Nazis were criminals and murderers. Not only had Musy switched his loyalties, he became an emissary of a Zionist movement.
He told his old friend Himmler that the war was lost, and the persecutions of the Jews created a terrible impression abroad. With the war coming to an end, Hitler had ordered the extermination of all remaining Jews in the Nazi death camps throughout Europe. However, if Himmler kept camp inmates alive, stopped the death marches, gassings and executions of the remaining 600,000-800,000 Jews, instead of annihilating them as Hitler ordered, he could expect more favorable treatment from the Allies. 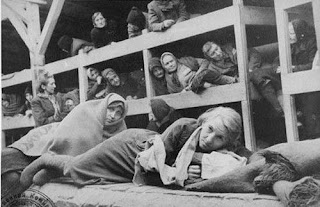 The Nazis were in need of medicine, trucks and other material. Himmler demanded from Musy five million Swiss francs worth of medicine and relief supplies in exchange for freeing and delivering trainloads of Jewish concentration camp prisoners, promising the release of 1,200 to 1,800 Jewish prisoners every week or two from Germany to Switzerland.
Delivery of such materials was seen as aiding the enemy and therefore illegal. Cash payment also posed problems. Himmler wanted to approach the West. In hopes of contact with the Allies, he was willing to make concessions without any economic returns.
Another view is that in 1945, hoping to use the surviving prisoners at Theresienstadt as a bargaining chip for opening negotiations with the western powers, Himmler, and possibly other SS leaders, agreed to release of 1,200 Theresienstadt prisoners in exchange for five million Swiss francs put up by Jewish organizations in an escrowed account in Switzerland.
When Himmler issued orders to release trainloads of Jews, he met with resistance. Minions faithful to Hitler told him of the release of the first trainload of Theresienstadt Jews. Hitler condemned his formerly faithful deputy for betrayal.
Jews still alive in the camps when the war ended were said to be there because Himmler ordered a halt to the murder of Jews and the destruction of the gas chambers at Auschwitz-Birkenau. Death marches, however, continued to the end of the war.
Himmler had been an architect of the Nazi genocidal program. After millions had been murdered, did he really think he could expect leniency?
No more trainloads arrived in Switzerland.
Everyone on that lone freedom train had been given new suitcases, clothes and shoes. They received bread, sausages, and Ovaltine. They were anxious as the train left Theresienstadt. Which way would it really go? West to life, or east to death? As they approached Switzerland, the women were given cosmetics to appear healthy.
Three months later, Theresienstadt was liberated. Did the freedom train make any difference? Had those 1,200 not gone to Switzerland, many would probably have died. To cover up their atrocities, the Germans sent a large influx of prisoners to Theresienstadt. A typhus epidemic broke out and decimated the camp. Hundreds died.
For 1,200 people, Himmler’s bid for favor meant life began again.