Why Did Germany Allow Hitler?


In my book No Neutral Ground (May 3, 2016), the main character exclaims, “This is 1936. We’re a civilized country. How can they do this?”
How could a civilized country like Germany allow Hitler and the Nazis to wreak havoc on the world? Life in the Third Reich by Paul Roland explores reasons why. 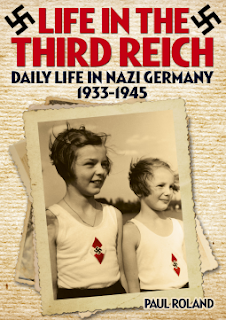 A lack of civil courage was as much to blame for Hitler’s rise as uncritical adoration by his supporters. The Nazis came to power using lies and dishonest means. They had suffered serious reverses in the 1932 Reichstag elections. If industrialists and bankers had withdrawn their support, the Nazis may have imploded. Instead, their sustained election campaigns gave the illusion that they were popular, strong, and well-funded.
Many Germans lacked enthusiasm for Hitler, but hoped for an end to the economic chaos and violence between rival political parties since their defeat in World War I. Life wasn’t easy. Many apartment blocks were unheated. Hot water bottles were taken to bed, and in the morning, the lukewarm water was used for washing. Communal bathrooms were common, with no toilet paper. Clothes were washed with a washboard and bristle brush once a month.
Once Hitler persuaded the elderly President Hindenburg to appoint him chancellor, the Nazis immediately clamped down on universities, Catholics, and government offices, disbanded trade unions, began indoctrinating children to turn them against their parents, and supplanting religion with neo-pagan worship, deifying Hitler. They burned books because they feared anything that encouraged people to think for themselves and question what was happening. Ballot papers on the national referendum on reoccupation of the Rhineland were numbered with invisible ink. Those who voted against reoccupation were arrested.
Robert Ley, the leader of the Nazi Labour Front, stated, “Our state … does not let a man go free from the cradle to the grave. We start our work when the child is three … and do not let them go until they die, whether they like it or not.”
The Nazis encouraged behavior that would subvert young people’s traditional religious upbringing, destroy moral sensibilities and civilized behavior. Physical prowess was valued over intellect. (Where was this vaunted physical prowess in Hitler, Goering, or Goebbels, three who failed to appear like Aryans?)
Life in the Third Reich focuses on those who were children in the 30s and 40s. All emphasized how they could trust no one with their anti-Nazi sentiments, at the risk of being reported and arrested. Support for the Nazis ebbed as the Allied bombing intensified. By then, the German people had lost all their freedom.


Paul Roland reveals the stark contrast between the myth of “One People, One Fuhrer” perpetuated by Nazi propaganda and the harsh realities of life in a dictatorship. It challenges the popular view of Nazi Germany as a nation united behind Hitler.
What would you have done? Would you have behaved any differently if you had lived in Hitler's Germany?

Email ThisBlogThis!Share to TwitterShare to FacebookShare to Pinterest
Labels: Life in the Third Reich


Actor Ernest Borgnine. What image comes to mind? A man built like a bull? The brutal Sergeant “Fatso” Judson in From Here to Eternity? The affable Lieutenant Commander Quinton McHale in TV’s McHale’s Navy? General Worden of The Dirty Dozen? What do you think of him? 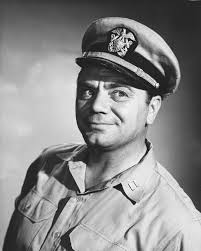 Before he was an actor, before the United States entered World War II, Ernest Borgnine served in the navy for six years. He served aboard a 1917 destroyer, the USS Lamberton, and looked upon those years as one of the most wonderful times of his life. He was proud to be a destroyer man, a tin can man.
A fond memory was his desire, as a member of the deck crew, to pilot the captain’s gig. When the opportunity arose, he polished that boat to a gleaming finish. He brought the boat alongside, and put one foot on the gangway and the other on the boat. The captain came aboard, telling him where he wanted to go.
When Borgnine pushed off with one foot on that highly polished boat, he slipped straight down between the boat and the gangway into the water.
After six years, he decided he’d had enough. He left the Lamberton in Hawaii and the navy in October of 1941. Two months later, the Japanese attacked. Borgnine went back to the navy.
Since he’d already put in six years of sea duty, he qualified for shore duty. He spent the war on a requisitioned yacht that belonged to William Lawrence Murphy, who made the Murphy fold-away beds that store in a wall niche. He had his own stateroom. They trained naval officer candidates, patrolled for U-boats, and served as a floating school for sonar operators.
After the war, he was 28 and had trouble finding a job. He considered going back to the navy, but his mother suggested he try acting. In order to attend Yale’s school of drama, he needed two years of undergraduate studies in classes like geometry, trigonometry, and calculus. He left and found the Randall School of Dramatic Art in Hartford, Connecticut, which he attended on the GI Bill. Then he accompanied another aspiring thespian to the Barber Theater of Virginia, and stayed for five years. He got good reviews and headed for New York.

He patterned his role in From Here to Eternity after a bosun’s mate he knew from his navy days. His time in McHale’s Navy gave him to opportunity to do things he hadn’t been able to do in the real navy. The secretary of the navy told him, “You’re the greatest recruiter we’ve ever had.”


Born in Los Angeles on the Fourth of July, 1916, Iva Toguri wanted to become a doctor and graduated from UCLA. When her aunt in Japan fell ill, 25-year-old Iva was sent to Japan to care for her on July 5, 1941.
Relations between the US and Japan deteriorated, and Iva made plans to go home. In December, the Japanese attacked Pearl Harbor. She was stranded. The Japanese police visited her, demanding she renounce her American citizenship. She refused. As an enemy alien, she was denied a food ration card.
She had no contact with her parents, who were sent to an internment camp. She moved out of her aunt’s home under pressure from neighbors who didn’t want to be accused of harboring an American spy.
Needing a job, she found work transcribing English-language radio broadcasts. Then she got a job with Radio Tokyo, typing scripts for programs broadcast to Allied soldiers. The Zero Hour was run by three prisoners of war: British-born Australian Major Charles Cousens, American Captain Wallace Ince, and Filipino Lieutenant Normando Reyes. Cousens recruited Iva as a broadcaster, believing her deep voice would not create homesickness among their listeners. Iva took the job, assured she would not have to broadcast anti-American propaganda. She called herself Ann or Orphan Ann. The troops called her Tokyo Rose.

The Japanese, of course, wanted the broadcasts to demoralize Allied servicemen. Iva, however, used her air time, like the POWs, to undermine Japanese efforts. She said things like, “We’re just going to begin our regular program of music, news, and the Zero Hour for our friends―I mean our enemies―in Australia and the South Pacific. All set?” She issued warnings that her program contained “wicked and dangerous propaganda, so beware.”
Most servicemen enjoyed listening to her. They did not hear treasonous talk.
In April, 1945, Iva married Felipe D’Aquino, a Portuguese citizen of Portuguese-Japanese descent. Four months later, the war ended. In October, she was arrested. She was held in prison for a year while the FBI and Army investigators examined her case. They found no evidence she had broadcast secret information and that her broadcasts “had little, if any, of the effect intended.”
Soon after, she was pregnant and wanted to go home to give birth on American soil. Gossip reporter Walter Winchell roused a storm of opposition. The American Legion and Department of Justice reopened her case and charged her with treason. In a trial in which the government spent $750,000 to prosecute her, she was found guilty on one count of treason, and sentenced to ten years in prison, loss of her citizenship, and fined $10,000.

She was paroled in January, 1956, after six years, two months in the Federal Reformatory for Women in Alderson, West Virginia. Twenty years later, a Chicago Tribune reporter claimed the FBI and US occupation police in Japan had coerced witnesses to give perjured testimony against her. On January 19, 1977, President Gerald Ford pardoned her.
When she died in 2006 at age 90, the New York Times reported that her “broadcasts did nothing to dim American morale. The servicemen enjoyed the recordings of American popular music, and the United States Navy bestowed a satirical citation on Tokyo Rose at war’s end for her entertainment value.”
Do you think the charges against her were prompted by race?
Posted by Terri at 12:00 AM 2 comments: