While I was growing up, we briefly had a green Volkswagen Beetle. All I remember of it was having to crowd into the back seat with my two siblings, the loud engine noise, and the time my sister and I turned it around in the driveway as a prank, and the mailman asked if we needed assistance.
Certainly the Volkswagen was known to be a German car. Less known is that the little car came into being thanks to Adolf Hitler. When he came to power in the 1930s, he wanted Germany to match the modernity of advanced economies like the United States. He introduced refrigerators, plows, and the People’s Receiver, an inexpensive wireless, short-wave radio that did not allow the Germans to receive foreign broadcasts. 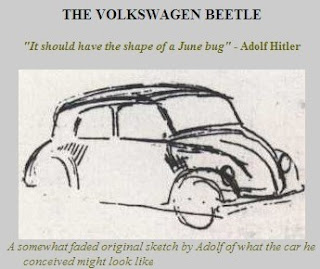 And then there was the People’s Car, the Volkswagen. With an excellent public transportation system, most Germans didn’t need a car and couldn’t afford one anyway. But to be modern, they needed autobahns and autos. Hitler hired Austrian Ferdinand Porsche to design an affordable car and sent him to tour American car factories.
The German people were prompted to enroll in a Volkswagen saving program. They pasted stamps worth five Reichsmarks in savings books until they accumulated the 990 Reichsmarks needed to buy a car. Only a quarter million people joined the program. The People’s Car remained beyond the mains of most German workers. 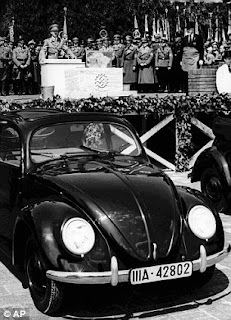 No one in the Volkswagen program ever got their car. The war interfered, and everything transitioned to war production. Six hundred thirty Beetles were produced before hostilities began, and these went to Nazi officials.
After the war, the Volkswagen factory ended up in the British Zone of Occupation. With transportation in the war-torn country needing dire improvement, the British restarted Volkswagen production. German engineer Heinrich Nordhoff, who had worked for General Motor’s Opel factory in Germany, worked long hours to bring the plant up to Detroit standards. By August of 1955, the millionth Volkswagen came off the line to the applause of 100,000 spectators.
The Beetle became an icon of West Germany. While not a glamorous car, it was functional, inexpensive, and easy to maintain. Its Nazi past was whitewashed as it was attributed to Porsche.
It was a best-seller in the States, where five million Americans bought “Bugs.” It even achieved movie star status as Herbie, the Love Bug, although the name Volkswagen was never mentioned in the film.
Volkswagen Beetle production ceased in 1978, only to be revived as the retro-chic New Beetle in 1997. The Volkswagen has overcome its Nazi origins.
Have you ever driven a Volkswagen?
Posted by Terri at 12:00 AM

Email ThisBlogThis!Share to TwitterShare to FacebookShare to Pinterest
Labels: Volkswagen