Roll Back the Clouds, my new novel about the Lusitania, releases on March 17. Many of the passengers aboard the ill-fated, final voyage appear alongside main characters, Geoff and Rosaleen Bonnard. I’ll be profiling several of them here. This week, meet Marie Depage. 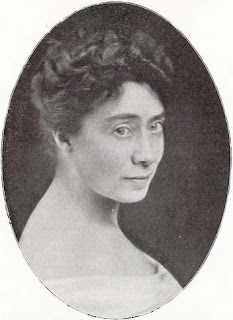 Marie Picard married Antoine Depage, a noted Belgian surgeon and chairman of the Belgian Red Cross, in 1893, and they had three sons. Marie was a nurse, and worked alongside her husband in Constantinople during the Balkan Wars in 1912.
When the Germans invaded Belgium in 1914, Dr. Depage established L’Hôpital de L’Océan in La Panne, Belgium. Marie helped train nurses, working closely with English nurse Edith Cavell. With the means for caring for the wounded becoming scarce, she embarked on a fund-raising trip to the United States in February, 1915. She raised over $100,000 and half that again in supplies.
Her middle son, Lucien, would soon be sent to the battlefront, and Marie headed for home to see him off. She had a ticket for the Red Star Lines S.S. Lapland, which would sail on April 29. The opportunity for a final fund-raising meeting that evening prompted her to switch to the Lusitania, which sailed on May 1. Both ships were due to arrive in Liverpool on May 7.
After the torpedoing, Marie was seen on deck calming children and assisting women into lifeboats. While onboard, she had met a friend, Dr. James Houghton, who would join her husband in La Panne. They jumped together when the water came over the deck, but became separated when Houghton struck his head. He believed she became entangled in ropes and drowned.
Contributors to her cause were assured their money wasn’t lost. Marie would not have carried such a large sum of cash. It was remitted to Belgium through the bank.
In Roll Back the Clouds, Rosaleen recognizes Marie Depage as the woman her Belgian father went to hear and contributed to the hospital.

Roll Back the Clouds, my new novel about the Lusitania, releases on March 17. Many of the passengers aboard the ill-fated, final voyage appear alongside main characters, Geoff and Rosaleen Bonnard. I’ll be profiling several of them here. This week, meet Ian Holbourn.

On an expedition to Iceland in 1899, 27-year-old Ian Holbourn passed by the Isle of Foula in Scotland. He visited Foula the following year, and determined to buy the island. He succeeded in doing so, and thus became laird of Foula. When he took his future wife to visit Foula, she was surprised they were treated like royalty.
Ian was a lecturer at Oxford, Cambridge, and London. His topics ranged from archaeology and architecture to Greek philosophy and medieval history to social and ethical problems. He was invited by the Lecturers’ Association of New York to tour the United States, and presented over one thousand lectures at universities across America.
For twenty years, he had been working on a manuscript entitled The Fundamental Theory of Beauty.  He had taken it with him to the U.S., hoping to have it ready for publication in 1916.
Returning home on the Lusitania, he was outspoken in lobbying for passengers to learn proper evacuation and how to put on lifebelts, and was critical of the captain’s refusal to hold lifeboat drills for passengers. A group of men came to him and ordered him to stop talking of these things and upsetting the others. For their refusal to face the dangers of sailing into the war zone, he called them the Ostrich Club.
When the Lusitania sank, he jumped into the sea with a few of his most important manuscripts.  He swam to an overcrowded lifeboat, where he was refused to come aboard. He threw in his manuscripts so at least they would be saved. After nearly an hour in the water, he was pulled into another lifeboat, and survived.
In Roll Back the Clouds, Geoff Bonnard hears Professor Holbourn warn of the possible danger and derisively refer to the Ostrich Club.

Roll Back the Clouds, my new novel about the Lusitania, releases on March 17. Many of the passengers aboard the ill-fated, final voyage appear alongside main characters, Geoff and Rosaleen Bonnard. I’ll be profiling several of them here. This week, meet the Pearl family. 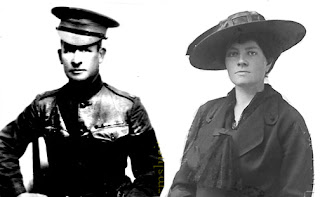 Surgeon-Major Warren Pearl serviced with the Medical Corps in the Philippines during the Spanish-American War. After he married Amy Lea Duncan in 1909, he retired from the military. While vacationing in Europe in 1914, their third child, Susan, was born, and the Pearls recruited Alice Lines to help with the children.
While they were in Denmark, Dr. Pearl went back to England, hoping to enroll Stuart, their eldest, at Eton. On his return to Denmark through Lübeck, Germany, he was arrested by the Germans on suspicion of spying for England. He was, after all, wearing English tweeds and carrying a copy of the London Times. He telegrammed his wife to come at once. While she was away, Alice Lines hired a Danish girl, Greta Lorenson, to assist with the children.
In the spring of 1915, Pearl was ordered to report to the American Embassy in London. The family traveled on the Lusitania. After the ship was torpedoed, Warren and Amy became separated from the children and their nurses on the crowded decks. When the ship sank, they were thrown into the sea. Both were pulled into lifeboats. They were reunited in Queenstown, and later found Alice Lines with 5-year-old Stuart and 3-month-old Audrey. No trace was ever found of Greta Lorenson, 3-year-old Amy (called Bunny), and 15-month-old Susan.

In Roll Back the Clouds, Rosaleen Bonnard is in the same lifeboat as Alice Lines with Stuart and baby Audrey.

Roll Back the Clouds, my new novel about the Lusitania, releases on March 17. Many of the passengers aboard the ill-fated, final voyage appear alongside main characters, Geoff and Rosaleen Bonnard. I’ll be profiling several of them here. This week, meet Nigel Booth. 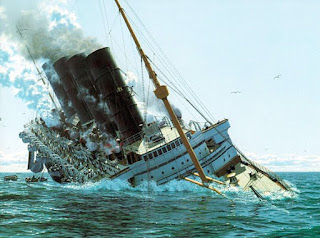 In the spring of 1915, 30-year-old Emily Hadfield Booth learned her mother in Leicester, England, was seriously ill. Emily, who had moved to Canada in 1913 to marry Henry Booth, booked passage on the Lusitania and took along her eight-month-old baby boy, Nigel, for a visit.
After the Lusitania was sunk on Friday, May 7, 1915, no trace was found of Emily, but Nigel was picked up out of the water.
On Saturday, two of Emily’s sisters traveled to the Cunard office in Liverpool, but could learn nothing of the Booths’ fate. On Monday, her parents received a cablegram from Henry Booth. He’d apparently been notified by Cunard that Nigel was safe; could someone go and get him. Emily’s sister Louisa immediately left for Queenstown.
Henry Booth traveled to Leicester to collect his son, and he fell in love with Louisa Hadfield. They married in August, 1916, and returned to Ottawa with Nigel.
In Roll Back the Clouds, Rosaleen Bonnard rescues Nigel while in a lifeboat.