“Sing, O barren woman, you who never boar a child; burst into song, shout for joy, you who were never in labor; because more are the children of the desolate woman than of her who has a husband,” says the Lord.   ~~  Isa 54:1

That verse spoke to me. I would never have children of my own, but here was a promise. It came true for me through World Vision and Compassion. For the past many years, I have had two, three, four, and more children at a time.
I sponsor them.
Marialina was my first, a young girl in Costa Rica. And then a baby. Her mother wrote letters. When their community “graduated” from the World Vision program, she wrote, “No one ever helped us before.” That’s stuck in my mind.
When I switched to Compassion, my first child was Marco Antonio, my little Mark Anthony. He had a cowlick, ears that stuck out, and a big grin. In Brazil, he wanted to be a soccer player when he grew up. One year, his father used the birthday money I sent to buy a second-hand, “much desired” bicycle. I almost went to Brazil to meet Marco and a young girl I sponsored, but I applied too late. The tour was already filled.
The vast majority of my children have been girls in Central and South America. They’ve lived in Brazil, Ecuador, Nicaragua, El Salvador, Bolivia, Colombia, Peru, Guatemala, Honduras, and Mexico.

When I visit Compassion’s website, their photos call to me. I have to restrain myself from taking on too many. They’ve shared their dreams for the future, reported on their progress in school, and told me about their friends. Two of the girls are now Facebook friends.


I invite you to visit Compassion's link at the right and give to one of these little ones even a cup of cold water in Jesus’ name.
Posted by Terri at 12:00 AM 2 comments:

Genealogy has been an interest of mine since a college history class. We lived in Michigan at the time, and frequently drove back to Green Bay. My family humored me by stopping in Milwaukee so I could look through birth, marriage, and death records at the court house. (This was before genealogy became such a booming hobby, and I had ready access to the records, unlike today.) I also visited the Brown and Manitowoc county court houses, and filled a notebook with names and dates.

These days, finding ancestral clues is easier with online genealogy sites and networking. In recent weeks, I’ve come in contact with two distant cousins.
My ancestry is three quarters German, one eighth Dutch, and one sixteen each Belgian and French Canadian. For the longest time, my Dutch line dead-ended with my great-great-grandfather, Gerhard Vogelzang, known in Wisconsin as George Vogels. My new Dutch contact clued me in to the Dutch website, where my Dutch ancestry has burst into bloom. I now know who my gr-gr-gr-gr-grandparents were. That equals some of my German branches.

Despite its small fraction, my French ancestry traces back the farthest. Many of my French ancestors arrived in New France in the mid-1600s. Many of the men were soldiers, come to guard French interests in the New World. In order to maintain a presence there, the king sent marriageable women, including several of my foremothers. Upon arrival, they paired off and married within weeks.
As I enter their names in a family tree on ancestry.com, I’ve been struck by the high number of babies these women bore. And lost. Ten to fourteen children was common, as was losing more than half of them. Many of them, men and women, could not read or write.
My Belgian ancestors continue to elude me. My great-great-grandmother Josephine Dennis is listed on the 1860 census as a 12-year-old, Belgian-born domestic living with a 45-year-old Belgian man and a 17-year-old French male. Where were her parents? Her mother may have died and her father parceled out his children, but what kind of life was that for a young girl in a strange country? All too common, unfortunately.

Many of my books’ characters bear my ancestral names. In Friends & Enemies, there’s Paul Braedel and Heidi Steinhorst Wetzel; in No Neutral Ground, Rafe Martell; and in Soar Like Eagles, Chet Vogel and Carol Doucet. Amazingly, in my next book, no one has an ancestral name. What was I thinking? Hmm, I can still change that.


Paul says in 1 Tomothy 1:3-4, “You may command certain men not to teach…endless genealogies. These promote controversies rather than God’s work—which is by faith.” Do you think this applies to the hobby of genealogy?
Posted by Terri at 12:00 AM 2 comments: 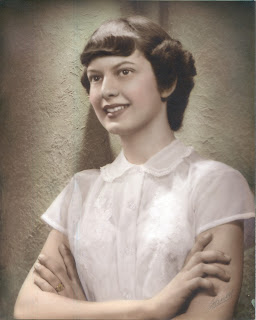 My last book, Soar Like Eagles, is dedicated to my mother, Carol Wangard. I wrote, “My mother had the gift of serving. She would have made a fine Doughnut Girl.”
Why do I think that?
From my elementary school days, I remember Mom working in the kitchen of First United Methodist Church in Green Bay, Wisconsin, mixing Kool-Aid and preparing snacks for Vacation Bible School.
I remember the birthday parties she organized for me. We’d play the party games like dropping clothes pins into a bottle and Pin the Tail on the Donkey. And there’d be a cake she baked.
She sewed clothes for my sister and me, and for our Barbie dolls. The day before I started my freshman year in university, I’d tried to sew a new top to wear. The sewing machine and I never became friends, and that evening, I left in frustration for a department get-together, sure I’d have to wear something else. I came home to find Mom had finished it for me.
She held a variety of church offices through the years. When my dad opened his own real estate business, Mom got her real estate license and served as receptionist and salesperson. When my sister and I had out-of-town swim meets, Dad volunteered to drive one of the buses for the Green Bay YMCA swim team, and Mom came along as unofficial den mother
The Red Cross doughnut girls left home and served in some difficult situations, in all kinds of weather extremes. They had minimal comforts. (Read Soar Like Eagles and you’ll get an idea what their lives were like!)
No, I doubt Mom would have enjoyed washing her hair in a helmet, freezing her hands preparing the dough, or using a slit trench. But the combat troops didn’t have an easy life, and Mom would have seen the benefit of boosting their morale. Serving was her gift.
Posted by Terri at 12:00 AM No comments:

Who else always gravitated to the television when NASA launched a space shuttle? Who didn’t thrill to the majesty of the thundering launch? Who didn’t wish for the opportunity to look back at the earth from on high, seeing the earth’s curvature, and sunrises and sunsets every ninety minutes?

Do you remember what you were doing when you heard Challenger had exploded seventy-three seconds after launch? I’d been listening to the countdown as I drove to my library job in Fullerton, California. I arrived at the law school before the launch took place, so it wasn’t until I went out to the front desk later that morning and a law clerk asked if I’d heard. I rushed back to workroom and asked our student assistant if he knew anything about the explosion. I’ve never forgotten his dumbfounded expression.
How about Columbia’s last ill-fated flight? My mother and I had been downtown running errands and heard the news at the post office. I remember a sick feeling.
Before the shuttle, the Apollo flights mesmerized me. Imagine, flying to the moon. I’ve read nearly all the astronaut memoirs. So maybe you can imagine my pleasure at receiving an advance copy of Jeffrey Kluger’s Apollo 8, which releases next week.

The crew of Apollo 9 consisted of Commander Frank Borman with Jim Lovell and Bill Anders. Busy training for their earth orbital mission at the Rockwell plant in Downey, California, Borman was abruptly called to Houston. Apollo 8 was to test the new lunar module, but the LM was delayed. NASA decided on a bold, audacious stroke. Switch the crews around, and send Borman and company into lunar orbit.
So far, Apollo had been a failure. The crew of Apollo 1 had been killed in a fire during training. No Apollo spacecraft had yet flown. The first manned flight, Apollo 7, was still to come. It would be followed by Apollo 8. To the moon.
Imagine the thoughts of Susan Borman, Marilyn Lovell, and Valerie Anders. Mrs. Borman asked Chris Kraft, NASA manager, what her husband’s chances of returning home were. Fifty-fifty, he told her.
Apollo 8 was a thrilling success. While orbiting the moon on Christmas Eve, the astronauts read from Genesis to a listening world. Said Bill Anders, “We came all this way to explore the Moon, and the most important thing is that we discovered the Earth.”
How can anyone not take pride in our accomplishments in space? 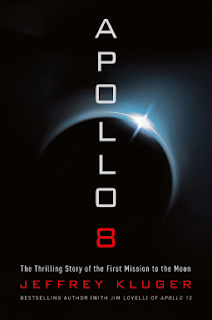 Email ThisBlogThis!Share to TwitterShare to FacebookShare to Pinterest
Labels: Apollo 8

The Berlin zoo has been popular in Germany since its opening in 1844. It stimulated their intellectual curiosity about the broader world, lands and peoples beyond their borders. Unlike other zoos in Europe, the Berlin zoo was open to the public.

A zoo in the nineteenth century was much different than today. Folks went there for society: concerts, restaurants with 5,000 tables, evening strolls away from the urbanization of the city, and to see animals. In Through the Lion’s Gate, author Gary Bruce shares another quirky attraction: Berliners were excited by the prospect of smoking at the zoo, an act banned since 1787 on streets and squares.

People were less concerned about the welfare of animals than the need for educational and scientific goals. One of the founders, Martin Liechtenstein, was aghast that visitors put lit cigarettes in the hands of monkeys, but also promoted social dinners serving surplus zoo animals.
Animals were captured in the wild by hunters killing the mother and capturing the baby. Dominating nature and imposing man’s will on the animal world were the themes of the nineteenth century.

People were also displayed in the zoo. Inuits from Greenland, Nubians from northeast Africa, Mongolian nomads, Chileans, Lapps. As late as the 1920s, human exhibits were common. The people demonstrated their hunting skills, wedding traditions, and dances. This may sound similar to today’s living history museums, but in at least one instance, when an Inuit didn’t do what the sponsor wanted, he was whipped with a dog whip.

In the twentieth century, a new emphasis grew to save animals rather than hunt them into extinction. Animals’ lives, freedom and happiness are more important than dominance. During the Nazi era, nature conservation and animal protection were big themes. The Berlin zoo was implicit in identifying with Nazi racial policies, and tried to whitewash its past. At the outset of the war, the zoo had over 4,000 animals. At war’s end, only ninety-one had survived. Despite towering piles of rubble and make-shift shelters among the ruins, the zoo reopened two months later. More than a million Germans visited the zoo in the year after the war.

A devoted population saved the zoo many times, as they did during the Berlin Airlift. Zoos are expensive, and the people gave money to the zoo even when they had little.
After the war, the first female director discontinued public feeding of the animals, which led to deaths through overfeeding or intestinal infections. A polar bear died after being fed salt herring.


Through the Lion’s Gate by Gary Bruce releases in August. It offers an engrossing history of Berlin’s zoo.
Posted by Terri at 12:00 AM 1 comment: