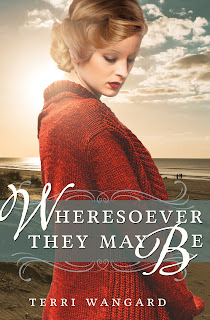 
For too many people, war doesn’t conclude with a happy ending. Wheresoever doesn’t end with a wedding and happily ever after, but the possibility of hope for the future and happiness.
Posted by Terri at 12:00 PM 2 comments:

Prodded by his wife Eleanor, President Roosevelt signed the women’s naval reserve corps into law on July 30, 1942. Mildred McAfee, president of Wellesley College, was sworn in as a naval reserve lieutenant commander, the first female commissioned officer of the U.S. Navy and the first director of the WAVES. 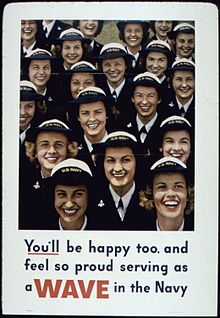 Officer candidates were required to be between 20 and 49, and have a college degree, or two years of college and two years of equivalent professional or business experience. The enlisted age requirements were between 20 and 35, with a high school or business diploma, or equivalent experience.
By early August, women from every state had applied for the general navy service positions offered in Bainbridge, Maryland. An intensive 12-week training course involved eight-hour days of classroom study. The women, equivalent to yeomen, were trained to perform secretarial and clerical functions. They did much more than that, performing duties in aviation, the Judge Advocate General Corps, medical professions, communications, intelligence, science and technology. Some of their job titles during WWII included Aviation Machinist's Mates, Aviation Metalsmiths, Control Tower Operators, Aerographer's Mates, Link Trainer Instructors, and Parachute Riggers.
By fall of 1942, the U.S. Navy had 10,000 women for active service. The navy established the WAVES to perform the same assignments as the women in the army.
For the position of control tower operations, the preferred candidate had to meet the following criteria: be 25 to 30 years old, have 20/20 vision, normal auditory acuity, speaking ability, and quick reactions in stressful situations. 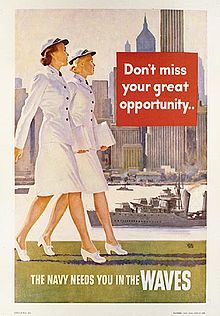 Recognizing their natural talents and the ability to perform as well or better than men, the Bureau of Aeronautics restricted aviator operator positions to the WAVES in the fall of 1942.
WAVE parachute riggers were not required to do so could jump to test the chutes, but after WAVE Kathleen Robertson went beyond her normal duties of inspecting, repairing and packing parachutes, and successfully executed a jump, WAVES were allowed to jump. At least one third of the WAVES were assigned to naval aviation duties during World War II.
The women served at 900 shore stations in the United States. The territory of Hawaii was the only overseas station allowed. They were prohibited from serving aboard ships.
For the women, joining the navy was a broadening experience in which they formed lifelong friendships.
Posted by Terri at 12:00 AM 2 comments:

General “Hap” Arnold admitted it. Women can fly as well as men.
With a severe shortage of pilots in 1942, the United States turned to an experimental program to help fill the void: Train women to fly military aircraft so male pilots could be released for combat duty overseas. There was no military plane not flown by women during World War II.
Over 1,100 women, all civilian volunteers, flew as part of the WASP program. They ferried new planes long distances from factories to military bases and departure points around the country. They tested overhauled planes. They towed targets for training ground and air gunners, who shot with live ammunition.
Pioneering aviator Jacqueline Cochran headed the WASP program. She believed the program would be militarized if it was successful. It was. The women’s safety records were comparable and sometimes even better than male pilots doing the same jobs.

At first, the suggestion was made to militarize the WASPs into the Women’s Army Corps. Only one female colonel was allowed, however, and that was Col. Oveta Culp Hobby. Cochran refused to serve under her.
By 1944, the Allies had achieved air superiority in Europe, and pilots were coming home. They were eligible for the draft, and wanted to keep flying. No longer were women needed to release the men for combat. The men wanted to get rid of the women.
Cochran told Arnold to give her charge of a militarized WASP program or disband it. Arnold wasn’t willing to fight her battles anymore; he had a war to win. The WASPs were disbanded.
The women had no benefits, no gold stars for their parents’ windows if they died. And 38 women did die in service. And because they were civilians, the military didn’t pay for their remains to be shipped home. The women took up a collection for that.
In 1976, the Air Force announced they would admit women to their flying program. “It’s the first time that the Air Force has allowed women to fly their aircraft.”
That upset former WASPs. It wasn't true. They had been the first to fly military planes.
Finally, in 1977, the WASP were granted military status.

You’re in the Auxiliary Army Now

With the necessity of fielding armies to wage a two-front war, America needed more manpower than was available. America needed its women in uniform.
During the in between-war years, studies were conducted on the use of women in World War I. Recommendations were made for the probable use of women in future wars. The final analysis was, don’t put them in auxiliary organizations. Put them in the military with benefits and protection. 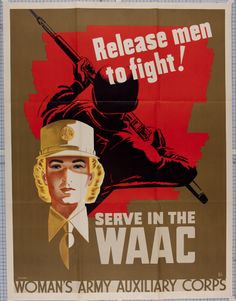 At the beginning of World War II in Europe, new planning was uninformed of the earlier recommendations. The conclusion was, yes, women were needed, but under no circumstances should they be given military status.
The Women’s Army Auxiliary Corps was formed in May 1942. Because Congress had dragged its feet in passing the bill creating the WAAC, planners missed out on the training site in Maryland they wanted. Instead, they found a recently vacated horse barn in Des Moines, Iowa. The dormitories smelled like horses.
When the women finally received uniforms, they got whatever sizes they were given. When the army sought publicity for the new uniforms, all the press wanted to know about was the olive drab underwear.
The women’s pay was a rank behind the men’s. Director Oveta Culp Hobby was a colonel with a major’s pay.
The first class of WAACs at Des Moines served as guinea pigs. The army didn’t know how to feed them. Using a survey of business women, they served the WAACs sandwiches and salads, while men ate steak and stew.
Rumors spread. According to one, physicians rejected all virgins. Reporter John O’Donnell wrote in his column Capitol Stuff that the War Department issued prophylactics to all WAACs before they went overseas. These were so the women could fulfill the “morale” purposes for which the army had really recruited them.
An FBI investigation thought to uncover German propaganda, but the smear campaign was homegrown. Soldiers who had never come across any WAACs wrote critically about them in letters home. Wives and mothers resented the women who served overseas in close contact with their men.
Because the women didn’t have military status, they weren’t able to release men for combat, the primary reason for the WAACs. A military position could only be filled by military personnel. Plus, the women could leave their jobs whenever they wanted. The army had become dependent on the women and wanted control over them. It was time to drop “Auxiliary” from the WAAC and put them into the Regular Army. The new bill went to the president’s desk on July 1, 1943, for his signature.

Men didn’t have a choice about serving. They were drafted. The women volunteered. They worked long hours with little rest. They faced scorn at home and danger overseas. One hundred eighty-one died in army service.
Mary B. Johnston, a cryptanalyst who had to learn Japanese and Morse code for her job, said, “We were out there to do a job and everybody was dedicated to that job. We were in battle zones and we worked HARD! With something important to do, you get it done and feel good about it, because it can make a difference in the war and because you made a contribution. We all felt a sense of accomplishment and participation.”