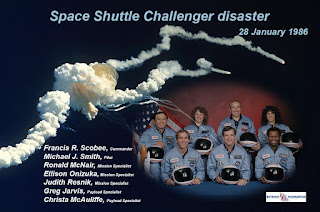 He did, and the awful news filled the room. Challenger was no more. Seven lives―gone.
Does the loss of Challenger remind you of the loss of the Titanic? Both were doomed by over-confidence and poor decisions of man, believing himself to have mastered his universe. That attitude is an accident waiting to happen.
Posted by Terri at 12:00 AM 2 comments:


Imagine being a German field commander and hearing a tank battalion crank up a mile away, or an infantry regiment on the move just beyond that rise up ahead. What would you do? Chances are, what you heard was merely a sound recording.

The U.S. Ghost Army was a 1,100-man unit officially known as the 23rd Headquarters Special Troops. The tactical deception unit impersonated other U.S. Army units to deceive the enemy during World War II. They used fake tanks, aircraft, and artillery, equipment pioneered by British, and used giant speakers to broadcast the sounds of men and artillery. Their ruses made the Germans think they were facing large forces, and deflected German units from the locations of actual allied combat units.
The American unit sailed for the England in early May 1944, and participated in Operation Fortitude, the British-designed and led D-Day deception of a landing force designated for the Pas-de-Calais. They then went to France and, until the end of the war, put on a “traveling road show” utilizing inflatable tanks, sound trucks, fake radio transmissions, and pretense. They staged more than 20 battlefield deceptions, often operating very close to the front lines.

Many of the ghosts had been actors, set designers, artists, and engineers, recruited from occupations that required creative thinking. Others were meteorologists and sound technicians. Among them were fashion designer Bill Blass and movie star Douglas Fairbanks Jr.
For visual deception, their equipment included inflatable airplanes, cannons, jeeps, tanks, and trucks that they inflated with air compressors. Imperfect camouflage allowed enemy air reconnaissance to see them. In a few hours, they put together dummy airfields, artillery batteries, motor pools, tank formations, and troop bivouacs, complete with fake laundry hanging out to dry.
Sounds of armored and infantry units were recorded, and mixed for each deception to match the desired scenario they wanted the enemy to believe. Played on powerful amplifiers and speakers mounted on halftracks, they could be heard fifteen miles away.
The Signal Company handled spoof radio, creating phony traffic nets and impersonating the radio operators from real units. Special operators were educated in mimicking a departing operator’s idiosyncratic method of sending Morse Code so that the enemy would never detect that the real unit and its radio operator were long gone.
Divisional insignia of units deployed elsewhere were applied on vehicles. To create the illusion of long convoys, trucks were driven in looping routes with two soldiers seated in the rear to suggest an entire infantry unit being transported under the canvas covers.

The actors in the Ghost Army spent time at French cafes near the war’s front, spreading gossip among enemy spies who might be there. Some dressed up as Allied generals and visited towns where the spies would be likely to see them.
How successful were the effects of the 23rd's operations? Sometimes they seemed to have no impact whatsoever. Other times they confused other Allies more than the enemy. Often enough, though, the Germans were completely bamboozled. Axis Sally, the radio propagandist, reported an entire Allied division was preparing for battle in a spot that actually contained, at the time, no troops at all. Prisoners spoke in awed terms of an "elusive" division. A map overlay captured before one engagement showed that the enemy had mistakenly positioned a U.S. unit right where the 23rd wanted them to think it was.
An adverse effect of their successful illusions resulted when the Germans believe they were real combat units and called down fire on them. Operating so close to the front lines left them as battle scarred as the troops they impersonated.

The Ghost Army’s role was to create the illusion that their military force was bigger and more powerful than it actually was. They were to create chaos and confusion. They are estimated to have saved many thousands of soldiers’ lives with its deceptions, and to have been instrumental in several Allied victories in Europe. Yet the story of the Ghost Army remained a military secret until its declassification in 1996, and aspects of it remain classified.
In the words of one veteran who served alongside them in their most impressive performance at the Battle of the Rhine, “These men are real heroes―not heroes because they killed a lot of Germans―heroes because they saved thousands of American lives.”
Posted by Terri at 12:00 AM 3 comments: 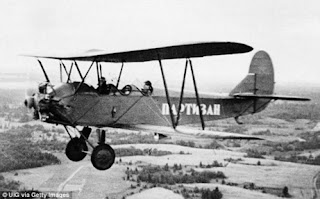 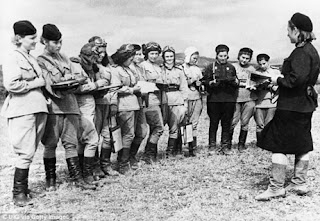 
Today’s authors “hit the road” and go on blog tours. If you’d like to follow along, here are my stops. 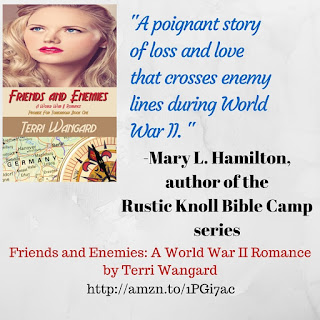