Today is the Day! 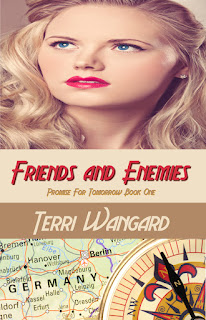 Friends and Enemies releases today. I am now a published author. Scary thought! What if no one likes my book? Oh, I’ve been told it’s good by friends who critiqued it or read it to endorse it, but they’re friends. It won an award, but that was based on the first several pages, not the whole story.
What have I gotten myself into? Why did I think I could write?
I enjoyed writing stories as a kid. The first Girl Scout badge I received was the Writer. But to write a book? In fact, a series of three books, all releasing this year?
I started writing in the early 2000s. A publisher had my contemporary manuscript for a year before saying, “No thanks.” I had been writing another story, but set it aside. Then in 2008, I read Debbie Macomber’s book Twenty Wishes, about a group of women who decide to fulfill their dreams. That got me interested in writing again, and I bought a laptop.
And now? People can actually buy my book!

Email ThisBlogThis!Share to TwitterShare to FacebookShare to Pinterest
Labels: Friends and Enemies