Everyone’s heard of the monuments men, right? The 2013 movie highlighted their task of recovering artwork stolen by the Germans during World War II.
Did you know there were also monetary men? Their job was to recover tons of gold, silver, and diamonds.
When the Germans invaded their neighboring countries, they quickly relieved the national banks of their gold reserves for the Reichsbank. When the fortunes of war turned against them, the booty in Berlin was hidden elsewhere. Much of it was found in Merkers Mine. The mine and its enormous hoard were portrayed in The Monuments Men: gold, silver, platinum, jewelry, artwork, enough to boggle the mind. 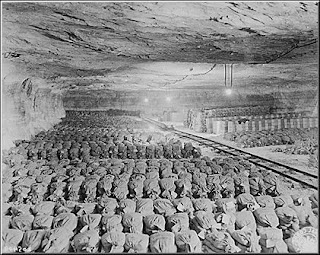 The U.S. Army transported the monetary hoard to a Reichsbank building in Frankfurt requisitioned to serve as the Foreign Exchange Depository.
Large amounts of gold had been moved to southern Germany, Austria, and Switzerland. The U.S. Army put together a task force that, upon learning of stashes, traveled around to secure the gold and valuables. Some was found in bank vaults. Other caches were buried or hidden in cellars.
In Plauen, the bank had been destroyed in an Allied bombing. The vault was undamaged, but required three keys to be opened. One was in the pocket of a cashier killed and buried in the rubble of his apartment. Engineers blasted the vault open.
The team worked around the clock to find the gold in towns that would become part of the Russian Zone of Occupation. When the Russians later inquired about the Plauen gold, the US Finance Division of the Army claimed their investigation yielded no information on those funds.
After several weeks and thousands of miles of travel and exhaustive searches, the task force recovered a large portion of German plunder that would not fall into the hands of advancing Russians or fleeing Nazis. 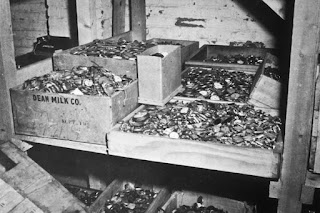 Germany had buried assets deep in neutral countries. These countries―Switzerland, Portugal, Spain, Sweden―claimed ignorance in accepting looted gold from the Reichsbank, and all weren’t willing to recognize the legal liability to restore the stolen wealth.
In 1947, the Tripartite Gold Commission (the United States, England, and France) sent questionnaires to potential claimant countries to help it determine who was entitled to the collected gold. Claims were received from Albania, Austria, Belgium, Czechoslovakia, Greece, Italy, Luxembourg, the Netherlands, Poland, and Yugoslavia. Their claims exceeded the available gold by 35.86%. That much of the total gold reserves in Europe in 1939 had vanished.
Clearly, the Allies had not recovered all the Nazi loot, and numerous former German diplomats were living large in neutral countries.
The Tripartite Gold Commission denied several claims. One rejected claim came from The Netherlands. When Germany attacked The Netherlands, the Dutch tried to move their gold out of German reach. A boat carrying 937 gold bars from Rotterdam, hoping to reach England, struck a mine dropped by German aircraft and sank. The Germans recovered 816 bars. The Tripartite Commission looked upon that as salvage rather than loot.
In 1997, claimant countries agreed to forgo their claims on the remaining sixty million dollars worth of gold still held by the commission and donate it as compensation for victims of Nazi persecution.

Email ThisBlogThis!Share to TwitterShare to FacebookShare to Pinterest
Labels: The Monetary Men