One Hundred Years Ago Today, a Martyr


“Someday, somehow, I am going to do something useful, something for people. They are, most of them, so helpless, so hurt and so unhappy.”
Born in December of 1865, Edith Cavell grew up in a vicar’s family. She served as a governess for ten years before spending the next twenty years as a nurse. The children she cared for remembered her as great fun though strict. She taught them her values as well as educating them, much of the time in affluent homes of prosperous families. 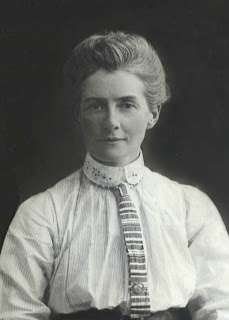 Her interest in nursing likely began when she visited a free hospital in Germany that so impressed her, she set up a fund for the hospital to buy surgical instruments. While she was in nursing training, she didn’t always get good reviews. She was said to be “not methodical nor observant and she over-estimated her own power.” She had excellent intentions and was conscientious without being quite reliable. In a way, her good intentions doomed her.
In 1907, Belgian surgeon Antione Depage started an independent nursing school. Nursing in Belgium was little changed from medieval times. Hospitals were run by churches, and untrained nuns looked after patients. Spiritual care came before physical care. Cleanliness was unimportant. Nurses were considered lower than servants.
Depage hired nurses from Sweden, Germany, Denmark, and Holland. The position of matron was offered to Edith Cavell on the recommendation of the mother-in-law of one of the children she’d been governess to in Belgium. The Belgians wanted a school like Florence Nightingale’s, with an Englishwoman who knew their language and lifestyle.
Edith turned nursing into a profession in Belgian with the highest standards for trainees and a model hospital. She had been visiting her mother in England in 1914 when notified that turmoil was breaking out on the continental after the assassination of Archduke Franz Ferdinand of Austria and his wife. She hurried back. When war was declared, she sent the German nurses home. Most Dutch and English nurses also left. Curiously, a German maid stayed, and caused trouble. 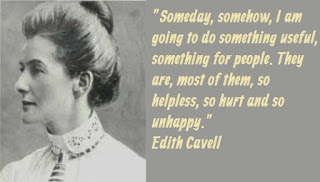 From Brussels, they could hear the cannon and see smoke through binoculars. On August 21, German troops marched into Brussels. Wounded soon came to Edith’s hospital from the battle on Mons.
Prince Reginald de Croy and his sister Princess Marie cared for wounded Allied soldiers and helped them escape from occupied Belgium. When two wounded English soldiers were taken to Brussels, Marie Depage, wife of the nursing school founder and a fatality in the sinking of the Lusitania, directed them to Edith, beginning her role in the resistance movement.
The Germans were suspicious. They made frequent surprise visits to the hospital, looking for Allied soldiers. Edith noticed strange workmen in the street who accomplished nothing. A Zeppelin passed low over Edith’s house, watching and photographing.
Careless risks were taken. Hiding soldiers routinely went out at night. Once a group returned drunk, singing at the top of their lungs. In May, Edith asked that no more be sent to her. However, she could never turn away anyone in need of help.
In June, 1915, an Englishman attacked and destroyed a Zeppelin in mid-air. This and raids on Zeppelin hangers infuriated the Germans. Belgian independence day observations on July 21 added to their fury. Ten days later, arrests began.
Edith was arrested on August 5. The Germans tricked her by pretending to know more than they did. Her statements translated into German were falsified. On October 11, after a trial in which defense attorneys were not allowed to see the defendants beforehand, she received the death sentence. That night, a pastor said she would be remembered as a heroine and a martyr. She replied, “Think of me only as a nurse who tried to do her duty.” 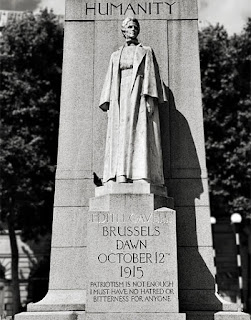 At dawn on October 15, 1915, she was executed by firing squad. One bullet through the forehead and three to the chest.
Would you have been brave enough to help the Allied soldiers in occupied territory?