Jimmy Stewart enjoyed success in Hollywood. Professionally, he won the 1941 Academy Award as Best Actor for The Philadelphia Story. Personally, he made the conquest of many of his female costars.
With American involvement in war likely, the draft began. His draft number got him in early, before Pearl Harbor. He waged his own battle to get into the Air Force. Overseas. In combat. Not just one token mission, but a sustained combat tour.
Serving their country was a Stewart family mission. Jim’s grandfather served in the Civil War; his father in the Spanish-American War and World War I. Alex Stewart expected his son to serve, too.
Louis B. Mayer of MGM, which had Stewart under contract, didn’t agree. He wanted to keep Jim out of combat and suggested he could best serve in the Army Air Corps Motion Picture Unit. Stewart did make Winning Your Wings, one of the most successful recruiting films of the war. But he would not allow it to deter him from serving in combat.
Stewart already had his own plane and worked toward a transport license as a commercial pilot, doing as much as he could to increase his prospects and offset his advanced age of thirty-three. Most pilots were at least ten years younger than he.
He seemed destine to serve as a flying instructor. A talk with his commanding officer at Gowen Field in Idaho resulted in the “static” designation removed from his personnel file. A newly formed B-24 bomb group needed personnel, and Stewart was on his way as an operations officer of one of the four squadrons. 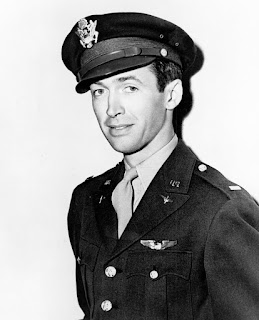 As a squadron commander in Tibenham, England, he flew missions in rotation with the other high ranking officers in the 445th Bomb Group. He shouldered responsibility for those missions, and saw friends die and planes explode. He wrote letters to the men’s families.
His hair began turning gray. A nervous stomach had always made eating a full meal difficult. Now he could barely eat at all, telling a childhood friends that ice cream and peanut butter got him through the war. He got the shakes, wrung out by the rigors of war. Nevertheless, he rose to Colonel in command of the Second Combat Wing.
After the war, Jim Stewart enlisted in the Officers Reserve Corp because he considered his service years as the happiest years of his life. And since acting was the only thing he liked to do, he returned to Hollywood, hoping to resurrect his career. Retaining stardom wasn’t a given. Many actors served in the military and failed to regain their momentum. New, younger actors were getting the starring roles.
Stewart was 37 and looked 50, no longer a probable romantic lead. Detective and murder pictures were now big, but having just been through the war, he wanted no part in a movie about death. Louis B. Mayer wanted to make The James Stewart Story about his war experience, but Stewart said no. His refusal to relive the war extended to conversation. He never talked about his experiences.
Actors weren’t the only ones having trouble getting reestablished. Producer/director Frank Capra wasn’t getting offers, so he went independent and called Jim Stewart about a project he had in mind called “The Greatest Gift.”

Renamed, It’s a Wonderful Life saved Jimmy Stewart’s career. What do you remember him best for?

Recommended reading: Mission: Jimmy Stewart and the Fight for Europe by Robert Matzen
Posted by Terri at 12:00 AM