If you’ve read No Neutral Ground, you may remember the role played by the Queen Mary. The luxurious ship was stripped of its fancy furnishings and transported troops to the battlefields.

Since 1967, the ship has been in Long Beach, converted into a floating hotel. Now it’s in serious trouble. A small news item appeared in the newspaper:
Price for Corrosion Repairs on Queen Mary Nears $300 Million
Say what??
A single paragraph explained:
“The Queen Mary is so corroded that it’s at urgent risk of flooding or collapse, and the price tag for fixing up the 1930s ocean liner could near $300 million, according to experts. It would likely take five years to rehab the ship, a tourist destination docked permanently in Long Beach Harbor south of Los Angeles. The hull is severely rusted and areas, including the engine room, could be prone to flooding.”
How could this have happened? 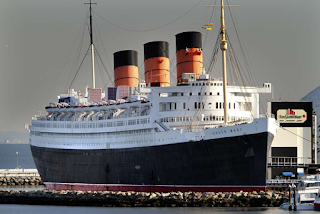 A very many years ago, I toured the Queen Mary during a visit to California. Like so many other places I’ve visited, I had no idea I would one day write a book featuring the Queen. Now I appreciate its history and wish I could remember that visit. But the only thing that comes to mind is dark paneling.