In 1939, the ship St. Louis sailed from Europe with Jews fleeing the Nazi take-over. The ship was refused entry to any port in the Americas, and had to return to Europe. Anti-Semitism was alive and well in the United States, and the Nazis had a field day, crowing how no one wanted the Jews.
The following year, 317 passengers charted a Portuguese ship to take them to New York and Mexico. They had visas, but the captain suspected some were forged, and demanded they buy return passage should no one admit them.
The Quanza arrived in New York City on August 19, 1940, where 196 passengers, American citizens or visa-holders, disembarked. The other 121, nearly all Jewish refugees, were barred entry.
In Veracruz, Mexico, only 35 passengers were allowed to disembark. Local authorities ordered the ship to return to Europe with the remaining 86 passengers, primarily Belgian Jews. 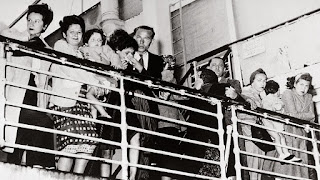 When the Quanza arrived in Norfolk, Virginia, to refuel, a Jewish maritime lawyer filed suit in federal court, suing the Portuguese National Line for breach of contract on behalf of four of the passengers. During the six days the ship was held in port, Jewish-American associations lobbied for the passengers’ admittance to the United States. First Lady Eleanor Roosevelt was apprised of the situation and appealed to her husband. The president sent Patrick Murphy Malin, a member of the President’s Advisory Committee for Political Refugees, to investigate the refugees’ status. He issued them all visas and they entered the United States on September 14.
President Roosevelt received roses with a note reading, "With everlasting gratitude for your humane gesture, from the refugees of the SS Quanza."


The State Department vehemently opposed their admittance. Assistant Secretary of State Breckenridge Long, a rabid anti-Semite, worked to block further immigration and, by mid-1941, almost no war refugees were admitted to the U.S.
Posted by Terri at 12:00 AM