Who Wrote "It Is Well With My Soul"

Many Titanic victims are buried in Halifax, Nova Scotia. A tour guide at the cemetery told us one of the survivors who lost his family wrote the words to “It Is Well With My Soul.” I knew he was wrong, but I didn’t care to challenge him. 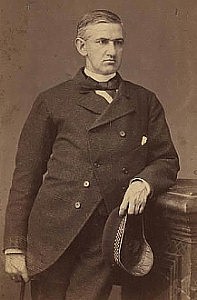 A glance in a hymnal will tell you the words were penned by Horatio Spafford, born in 1828. He was a successful attorney and real estate investor who lost a fortune in the great Chicago fire of 1871.

Two years later Horatio decided the family would travel to England for a vacation and to attend one of their friend Dwight L. Moody’s evangelistic crusades. His wife and four young daughters journeyed to England, but he was detained on business and planned to join them as soon as possible. On November 22, 1873, the ship was involved in a collision and sank. More than 200 people lost their lives, including all four Spafford daughters. His wife, Anna, survived the tragedy. Upon arriving in England, she sent a telegram to her husband that began: “Saved alone. What shall I do?” 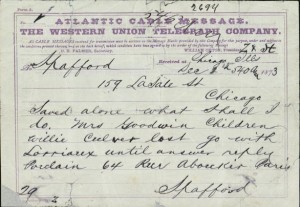 Horatio immediately left for England. During his voyage, the ship’s captain pointed out the spot where the shipwreck occurred. The grieving father wrote these words:
When peace like a river, attendeth my way,
When sorrows like sea billows roll—
Whatever my lot, thou hast taught me to know
It is well, it is well with my soul.
Horatio and Anna had a son Horatio, born in 1875 or 1876, and another daughter, Bertha, in 1879.  More tragedy in 1880 was theirs when their son died of scarlet fever.  The church they attended believed the family tragedies were the result of divine punishment. The Spaffords withdrew their membership and moved to Jerusalem, where they established the “American Colony,” offering aid to those in need, regardless of race or religion.  Another daughter, Grace, had been born in early 1881, and in August of that year, they began their journey.


Horatio Spafford died of malaria on October 16, 1888, and is  buried in Mount Zion Cemetery in Jerusalem.
Posted by Terri at 12:00 AM