I’ve been reading Lady in Red: An Intimate Portrait of Nancy Reagan by Sheila Tate. Nancy was often portrayed as a shrew, but her former press secretary does a great job of refuting that reputation.
The State Dinners of the Reagan years are covered, and that got me to thinking. If I could invite people to a State Dinner, who would I invite? 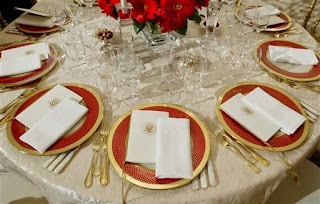 It’s no secret; astronauts fascinate me. I’ll start there. Jim Lovell of Apollos 8 and 13, the first manned flight around the moon and the successful failure. Moon walker Charlie Duke, who has said, “Walking on the moon was three days, but walking with Jesus is forever.” Shuttle astronaut Tamara Jernigan, veteran of five flights, doctorate in astronomy, my age.
An author, Robin Jones Gunn. I’ve enjoyed her books and I’ve was privileged to hear her speak. She’s the only conference keynote speaker whose words I still remember.
As a World War II writer, I need to have a WWII veteran, George H. W. Bush, a naval pilot whose presidential legacy should improve on historical assessment.
And his daughter-in-law, librarian Laura Bush. (Her husband, of course, is included.)
Sports figures are always popular. Green Bay Packer quarterback Bart Starr would probably have to decline due to poor health, but he’s been a towering figure, on the field and off. Figure skaters Paul Wylie and Scott Hamilton are inspiring.
Actors were very popular during the Reagan years naturally, with both of them coming from that line of work. I doubt if Doris Day would want to travel across country, but she’d get an invitation. So would Tom Hanks.
Marine artist Christian Riese Lassen is a possibility. I love his seascapes.
And Max Lucado.