Have you visited Arlington Cemetery and the Tomb of the Unknowns? Perhaps one of the biggest impressions made is the dedication of the honor guard, keeping watch no matter how bad the weather. 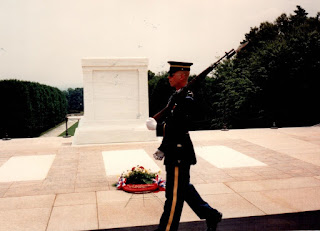 But what about the men inside the tomb? Have you heard how the first man, killed in World War I, found his way to Washington?
Other Allied countries honored an unknown. The French at the Arc de Triomphe, the British at Westminster Abby. A captain in the war, New York Representative Hamilton Fish, introduced legislation for a memorial in the United States,
Army Chief of Staff General Peyton March dismissed the idea. Likewise, Secretary of War Newton Baker believed all dead would be identified, and advised the Senate not to take up the bill. Public support grew, however, and General Pershing lobbied for a tribute. Baker got on board.
The Quartermaster Corps was ordered to select a body buried in France. Every detail of the selection process was planned to assure a body was chosen that could never be identified. From four cemeteries, a body was exhumed and carefully examined for any scrap that could reveal the man’s identity. After three years, he was badly decomposed, and his remains were carefully wrapped in a blanket and placed in a gleaming steel casket.
The four cemeteries represented the four major battles the Americans had fought: Belleau Wood; Bony, in the Somme; Thiaucourt, in the St. Mihiel drive; and Romagne-sous-Montfaucon, in the Meuse-Argonne.
The four identical caskets were taken to Chalons-sur-Marne, in the Champagne region of northeastern France. At the city hall, a French honor guard stood in formation as the caskets were carried inside. For two hours, French citizens passed through, paying final respects to the flag-draped caskets.
That evening, the caskets were shifted around so no one knew which casket came from which cemetery. To further confound the mystery in a game of musical caskets, the remains were then removed from their original caskets and placed in one of the others.
A wounded veteran, Sgt. Edward Younger, was selected to make the final choice. While a French military band played Chopin’s Funeral March, Younger entered the room with a bouquet of white roses. He walked around the caskets, wondering if any held a friend. Finally, he laid the roses on the casket second to his right upon entering the room.
America’s Unknown was transferred to an ebony and silver casket, which was sealed and placed in the city hall lobby. He lay in state until evening, with a French honor guard on one side and Americans on the other, as the public passed through. A funeral cortege, with black horses pulling a caisson, took him to the train station for another hour of laying in state before boarding a train.
After an overnight in Paris, the train arrived in Le Havre for another ceremony with another large crowd of French citizens bearing flowers. An elaborate funeral parade took the Unknown to the USS Olympia, which took him home. A French battleship fired a salute.
More ceremony was accorded the Unknown as he was carried through the streets of Washington. He lay in state in the Capitol Rotunda on Thursday, November 10, 1921. Between 90,000 to 96,000 came to pay him their respects, leaving mounts of flowers.
On Friday, Armistice Day, he proceeded to Arlington National Cemetery. Among those in the procession was a group of soldiers who had received the Medal of Honor, and a group of Gold Star Mothers, who had lost sons in battle.
After speeches and prayers, church bells rang out the noon hour, signaling for two minutes of nationwide silence. President Harding then spoke to the nation, his words transmitted electrically for the first time to New York, Chicago, and San Francisco.
Before the Unknown could finally rest in peace, he received awards. From the United States, he received the nation’s highest honors for military service: the Distinguished Service Cross and the Medal of Honor. He also received the Belgian Croix de Guerre, the Victoria Cross of Great Britain, the French Croix de Guerre with Palm, the Italian gold medal for bravery, the Romanian Virtute Militară, the Czechoslovak War Cross, and the Polish Virtuti Militari.
The Unknown Soldier is Unknown But to God. He died one hundred years ago.