No Drama on the Lusitania?

I read an article last year about Titanic fanatics. People collect chunks of asphalt and rusted pipes from the old Pier 54 in New York where the survivors came ashore. They buy canned seawater that may have flowed over the wreck and Styrofoam cups that have been taken down to crush depth. Social media sites abound for the Titanic.

Even before it sailed, and sank, on its maiden voyage, it captured the international imagination. Unprecedented in grandeur, its system of bulkheads led to the claim of being unsinkable.

Three years later, the Lusitania sank in a deliberate act of war by a German submarine. Eight years old, the Lusitania was also enormous and grand. It sank within sight of land, and people in Ireland watched its demise.

The Lusitania has never rivaled the Titanic’s fascination. Why not?

According to the article, the Lusitania sank too quickly. Titanic lingered on the surface for over two hours, whereas the Lusitania went down in eighteen minutes. Historian and president of the Titanic International Society Charles Haas said, “There wasn’t enough time for stories to play out and interpersonal dramas to take place [on the Lusitania].”

Seriously? There was plenty of drama on the Lusitania.

What do you think? 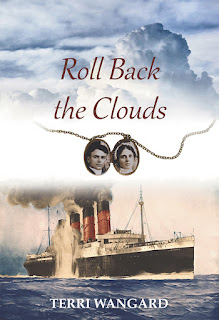 There’s plenty of drama in Roll Back the Clouds.