People’s diets from one hundred years ago horrify lots of folks today. Pie crusts made with pig lard? Meat for every meal?

One hundred years ago, hybridized wheat hadn’t been introduced. Tinkered with to produce drought-resistant crops requiring less time and fertilizer for robust growth, modern wheat may be to blame for the rise of celiac and gluten sensitivity.

Back then, commercially raised beef cattle weren’t kept in tight quarters and fed a diet of antibiotics that are unhealthy for us. Folks lived long, healthy lives without the obesity we see today.

Because America sent a lot of food overseas to the Allies and the army, rationing became necessary. Foods in short supply included wheat, sugar, fats and oils, and meat, especially beef. 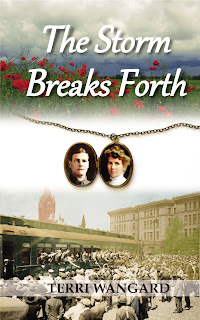 In my new book releasing next week, The Storm Breaks Forth, Maren Bloch coordinates a cookbook to help homemakers prepare tasty meals during wheatless and meatless days during World War I. Paging through some of these wartime cookbooks, I noticed many recipes call for lard or a fat other than butter.

Go into a grocery store today and you’ll find wheat flour. Other types of flour have become more common, found in gluten-free or specialty sections. A wide selection of flours was available one hundred years ago. I found many recipes calling for barley flour, corn flour, buckwheat, rye flour, graham flour, and bran flour.

I’m not going to rush out and purchase pig lard. However, Great-Grandma’s recipes shouldn’t be discarded. Here are samples from the Abingdon War-Food Book published in 1918.

½ lemon or orange (peel and juice)

Shell the peanuts and run peanuts, Pettyjohnn’s, and lemon rind through the meat grinder. Add fat, melted, and then water and lemon juice. Then add gradually sugar, salt, nutmeg, flour, and baking powder sifted together. Mix well and drop into greased pans. Bake in hot over 15-20 minutes.

Boil all ingredients but the flour, raisins, and soda together for 5 minutes. Cool. When cold, add soda sifted in ½ the flour, and the raisins mixed with the rest of the flour. Bake in a loaf 45 minutes in a slow oven, or in a sheet 30 minutes.

Bake the potatoes. Scoop out insides and rub through a sieve. There should be one cupful. When cold, add the other ingredients, and the egg well beaten. Flour the hands. Make into balls and drop into boiling salted water. Simmer for fifteen minutes.


Mix and place in a buttered baking dish and bake in a moderate oven half an hour. Serve with or without tomato sauce.

Melt the cheese over hot water; add the seasonings and milk gradually, stirring till smooth; add egg and beans and serve on hot toast or crackers.


Heat the molasses and fat to boiling point, add soda and combine with other ingredients, previously thoroughly mixed. Bake in muffin tins half an hour.

Email ThisBlogThis!Share to TwitterShare to FacebookShare to Pinterest
Labels: Abingdon War-Food Book, The Storm Breaks Forth