During World War II, submarines were built in Wisconsin. The Manitowoc Shipbuilding Company built twenty-eight submarines for the Navy, the only ones built at a freshwater port.

The shipyard president proposed building destroyers in 1939. The ships would be transported through the Chicago River, the Illinois River, and the Mississippi River in a floating drydock. The Navy suggested submarines instead. Knowing nothing about underway boats, a team traveled to New London, Connecticut, to learn from the Electric Boat Company.

Sea trials of finished subs were conducted in Lake Michigan. Peto, the yard’s first submarine, got underway on November 6, 1942. As it headed down river and under bridges to the lake, workmen and townspeople crowded the streets, shores, and office windows to cheer its progress. As it approached the outer harbor, a car ferry rendered three long and two short blasts on its whistle. Captain Foster, who had come out from New London to conduct the first trials, asked his pilot, a local seaman, what the signal meant. No such signal existed in the International or Inland Water Rules. The pilot informed him it was simply the Great Lakes salute from one vessel to another, signifying good luck and pleasant voyage.

Over five days of trials, the crew tested pumps, valves, hydraulic systems, steering gear, and plane operating mechanism. The first dive was made from a stationary position, bleeding in compressed air. With pressure holding, the sub slowly submerged, maintaining a perfect trim while a steady stream of reports came to the conning tower. Everything went well, with machinery functioning as expected and no leaks. Running dives followed.

The crucial test was diving to 300 feet. Peto headed to the middle of Lake Michigan opposite Sheboygan, Wisconsin. Here it dove in incremental depth increases, leveling off at each fifty feet for readings on the deflection of the hull and alignment of machinery. Everything was within allowable limits. Upon surfacing, more readings showed the hull had returned to its original shape within allowable tolerance.

A Trial Board of ten Navy personnel came from Washington for inspection. After two days of tests, Peto returned to port with a broom lashed to the periscope. It had made a clean sweep of all its test.

Twenty-eight submarines went through these tests in Lake Michigan. Of those, three did not see action before the war ended, and four are on Eternal Patrol, lost at sea. 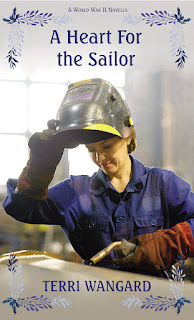 Evelyn van der Heiden is a Winnie the Welder. She builds submarines in Manitowoc, Wisconsin. Jerry Collier is a sailor aboard the USS Tabberer, a destroyer escort in the Pacific Fleet.

Evelyn is ready to marry, but Jerry is leery of taking a matrimonial step. It will take a tragedy to change his thinking.

This e-novella may now be preordered at https://www.amazon.com/Heart-Sailor-Terri-Wangard-ebook/dp/B09G8W9THY

Email ThisBlogThis!Share to TwitterShare to FacebookShare to Pinterest
Labels: Heart for the sailor, Manitowoc Shipbuilding, Submarines on Lake Michigan