King Louis XIV of France desired that his land in the new world, called New France, be populated. Soldiers who stayed behind after fighting the Indians that threatened the settlements needed wives, or they would return to France. The king offered a dowry of fifty pounds if a woman married a solider or common settler, and 100 pounds if she married an officer. In addition, she was given a small hope chest which contained the following: 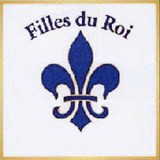 These marriageable young women were called Filles du Roi, daughters of the king. They are considered the mothers of Canada. At least eight of my ancestors are numbered among them.

One of the women who traveled to New France at the king’s expense was Marguerite Lamirault. Since she had a dowry of 300 pounds at the marriage and since her parents were still living, poverty did not prompt her to undertake the journey to a strange, dangerous land.

More likely, she already knew one of the soldiers. The Lamiraults lived withing five blocks of Honoré Martel in Paris. His father and Marguerite’s father were undoubtedly in contact. Honoré’s father was a horse merchant and Marguerite’s father was a coachman for the queen. Despite a 13-year age difference, Marguerite and Honoré may have been sweethearts, or their fathers arranged their marriage. Taking the king’s offer was an opportunity to increase her dowry and receive free passage to Canada.

The Lamiraults lived on rue des Poulies, the street that runs between Le Louvre, where the royal family lived, and the Saint-Germain l’Auxerrois church where Marguerite was baptized. Moving from Paris to the wilderness of Quebec must have been quite a shock for her.

She and Honoré were married on the morning of 17 November 1668 in Quebec. Marguerite was declared not able to sign the marriage contract, but Honoré could. They settled into a country life, beginning in the town of Sillery. Being from a city family, however, Honoré was not suited to the life of a farmer. After farming for twenty years without much success, he went into the lumber trade. He leased a house in the Upper-Town of Quebec that contained a cellar, two rooms on one floor, one of which was furnished as a foyer, and an attic.

Marguerite gave birth to fourteen children between 1669 and 1691. Four died in infancy. Her sixth child, Paul, was my seventh great-grandfather. She died on 17 Oct 1706.