A Facebook friend posted pictures from her trip to London. Having been there, I enjoyed perusing them. A surprise greeted me with the Tower of London photos. A sea of red flowed from the Tower. 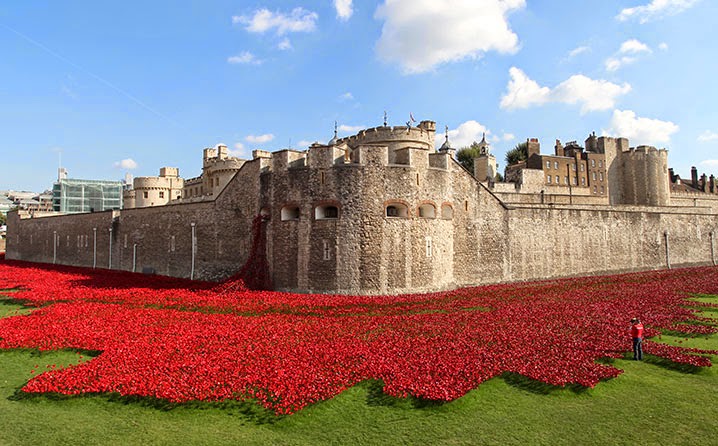 From August 5, Blood Swept Lands and Seas of Red has on display at the Tower of London, marking one hundred years since Britain's involvement began in World War I. Ceramic poppies have progressively filled the Tower's moat. It ends today on Remembrance Day, November 11, the date the armistice ended the war in 1918. Each of the 888,246 ceramic poppies represents a British military fatality in the war.

In Flanders fields the poppies blow
Between the crosses, row on row,
That mark our place; and in the sky
The larks, still bravely singing, fly
Scarce heard amid the guns below.

We are the Dead. Short days ago
We lived, felt dawn, saw sunset glow,
Loved and were loved, and now we lie
In Flanders fields.

Take up our quarrel with the foe:
To you from failing hands we throw
The torch; be yours to hold it high.
If ye break faith with us who die
We shall not sleep, though poppies grow
In Flanders fields.

Canadian Lt. Col. John McCrae wrote this poem early in World War I, before the disillusionment that came as the years dragged on. The poem so inspired Moina Michael of the American Young Women's Christian Association that she wrote a poem of her own.


Oh! you who sleep in Flanders Fields,
Sleep sweet - to rise anew!
We caught the torch you threw
And holding high, we keep the Faith
With All who died.

We cherish, too, the poppy red
That grows on fields where valor led;
It seems to signal to the skies
That blood of heroes never deis,
But lends a lustre to the red
Of the flower that blooms above the dead
In Flanders Fields.

And now the Torch and Poppy Red
We wear in honor of our dead.
Fear not that ye have died for naught;
We'll teach the lesson that ye wrought
In Flanders Fields.

Moina wore a red silk poppy pinned to her coat at a YWCA Overseas War Secretaries' Conference in November, 1918, and gave out twenty-five more. She sought to have the poppy adopted as a national symbol of remembrance.
The National American Legion did adopt the poppy as their official symbol of remembrance at a 1920 conference. Attending was a French woman, Anna Guérin, who began selling artificial poppies. She sent her sellers to London in 1921, where the poppy was adopted by Field Marshal Douglas Haig, a founder of the Royal British Legion.

The poppies at the Tower of London will now be sold for £25 (about $40) and will benefit charities.

Have you ever wondered why service organizations sell poppies at stores' entrances on Veteran's Day?