A one, and a two, and a “Friend or Foe?” The Acme clicker debuted in the 1920s as a time keeper for band leaders. How it came to the attention of the 101st Airborne Division is unknown. Someone may have seen it in use at a wartime concert and decided it would make a clever signaling device for the paratroopers.
Called the No. 470 clicker, manufacturer J. Hudson and Co. Ltd. of Birmingham, England, received a large order for the device for use by the 101st and 82nd Airborne Divisions. The military planned to use the clickers as a means of signaling in the early hours of darkness on D-Day. The soldiers called them crickets. 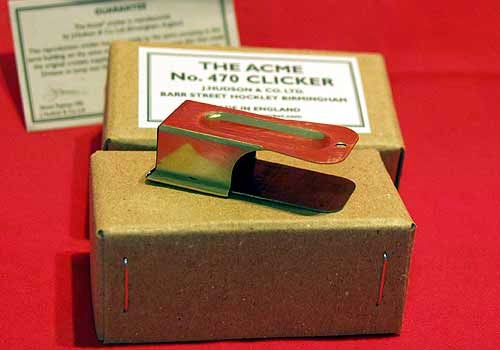 Very early on June 6, 1944, the paratroopers jumped into France. They landed scattered and out of position. The only soldiers one American could see were German. “We jumped right on top of them.”
Calling out, or checking their maps with a flashlight, would have been fatal. To find each other, they relied on their clickers, which some believe to have originated as prizes in Cracker Jack boxes.
To identify each other, one man would click once. If he was answered with two clicks, he’d found a friend. “The first American I picked up, I picked up with this,” recalled a veteran. “I gave him a click and he responded with two clicks. Boy, was I glad to see him.” Through the next few hours, he used his clicker to draw together a patrol.
Commander of the 101st Airborne Division, General Maxwell D. Taylor, said, “I had my pistol in one hand, my cricket in the other… I crept along the hedgerow looking for a gate. Just as I found it, I heard a stir on the other side. I drew my pistol and got all set. Then I heard the click. That was the most pleasant sound I ever heard in the entire war.”
General Taylor is said to have anticipated his men would need a way of finding each other in the likely chaos of D-Day. His aide, Pfc. Cecil J. Mick, thought of the child’s toy. Whether it was a toy or a band leader’s timer, the clicker saw service only on D-Day. Afterward they were to be discarded.

“The Germans picked them up off people they’d captured and people they’d killed, so it wasn’t a secret device anymore,” recalled Army Capt. Sam Gibbons.
Today the clickers can again being made. The National WWII Museum sells a replica clicker for $9. You can listen to a cricket here: https://www.youtube.com/watch?v=5lWIN6ktdKM
Posted by Terri at 10:30 PM