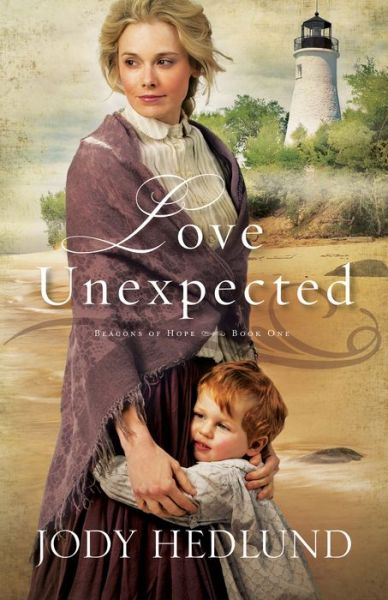 I’d heard Jody Hedlund’s Love Unexpected describe as similar to Janette Oke’s Love Comes Softly. How true. Emma Chambers, like Marty Davis, has to marry a man at first meeting because what choice does she have? She and her brother Ryan are destitute after pirates stopped their boat on Lake Huron and stole all their money. Patrick Garraty is desperate, too. He’s the lighthouse keeper of Presque Isle, he has a little boy, and his wife has just died. Emma’s the only available woman for miles around. They join forces to solve their problems.
Also like Marty Davis, Emma can’t cook. And like Marty, she has a neighbor to help her. But unlike Marty with Ma Graham, Emma has Bertie Burnham. Emma thought she’d found a friend, but Bertie can’t be trusted. She hates Patrick and blames him for the death of his wife, her cousin Delia.
When itinerate preacher “Holy Bill” suggests she and Patrick team up, Emma thinks she’s getting a job like a nanny. She’s shocked to realize he means marriage, but her deepest longing is for a home and family of her own. And Patrick is ever so gentle and kind with his toddler Josiah. He tries to tell her he’s done things he’s not proud of, but she says the past should stay in the past. After all, Holy Bill sings his praises.
Emma grows fond of Patrick, but how is she supposed to let him know she wants a real marriage? Several times, Patrick tries to speak of the past, but Emma assures him it doesn’t matter. Then she learns the truth under unfortunate circumstances. She’s horrified. Was Patrick a pirate? Did he shove his wife down the lighthouse tower stairs as Bertie claims? What is she to do?
Love Unexpected is the first of Jody’s new lighthouse series, Beacons of Hope.
Now let's hear from Jody:


1. Lighthouses tend to be romanticized, but life for the keeper and his family was often hard. What do you see as their allure?


Not only are lighthouse beautiful and picturesque, but they bring back a sense of nostalgia, poignancy, and romance that few other historical markers do. They're rich in historical details and stories. They're wrought with danger and death. And they're just plain fun to explore. Climbing the winding staircase, reaching the top, and peering out the tower windows (or in some cases going out onto the gallery) is breathtaking.

The men and women who lived in the lighthouses faced deprivation, isolation, and often great losses. Every time I visit a lighthouse, I gain a deeper appreciation for the people who devoted their lives to serve their country through manning the lights.

2. Most of your readers are probably women. Does your husband read your books?

No. My husband hasn't read any of my books. However, he doesn't read fiction. In all of the almost 25 years we've been married, he's maybe read one fiction book but instead reads lots of non-fiction. He may not read my books, but he's one of my biggest fans and supports me in countless other ways!

3. What is the take-away message you want readers to receive after reading your book?

The heroine, Emma, has lost hope in God due to some horrific experiences in her past. Although she "knows" God is still there, she doesn't have hope that he hears or cares about her personally anymore.

My prayer is that readers will find hope like Emma, that God does care. We may not always understand how he works or how he answers prayers, but he never abandons us.

No matter where we've wandered, no matter what we've faced, He is there as steady and constant as a lighthouse, bringing us safely into his harbor where we can find rest.

Your turn. If you had been a light keeper’s wife, what do you think would have been the most difficult aspect of your life?
Posted by Terri at 7:50 AM