Hyam’s mother dies two days before his 21st birthday, when his adulthood begins. She asked that he inform his father at Three Valleys Long Hall. Magic had been banned throughout the realm, but within the Long Halls, magery was still practiced.
Humans aren’t the only inhabitants of the realm. There are the telepathic Ashanta who keep to themselves. The green Elves, thought to have been wiped out by the Milantians, a warrior clan that brought havoc to the land and are now killed on sight.
Hyam’s father was a wizard, but Hyam learns his father died four years ago. The Mistress of the Long Hall remembers Hyam from his years there as an acolyte, before he was expelled.  She tells him he is not human, but most likely a Milantian.
She also tells him war is coming. The mayor of his village has heard rumors as well, and asks Hyam to go to the Ashanta and ask for news.
As he tills his field, for Hyam is a farmer, he is stunned to feel an energy in the earth. He plunges his spade in the ground and precise furrows appear. Armed soldiers come, threatening to burn his village and string him up for practicing magic. Hyam commands the earth to open, and the soldiers are swallowed up.
Hyam begins his quest for the Ashanta with his newfound magical prowess. He joins forces with the Ashanta, the Elves, and humans longing for justice to rid the world of evil and a mysterious crimson mage. 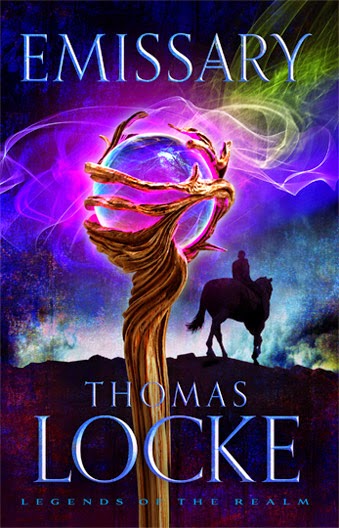 I was privileged to receive an advance reader copy of Emissary, which was released on Tuesday. Fantasy is a genre I rarely read, but I’m familiar with and enjoy much of the author’s work in other genres. Emissary held my attention from start to finish. I did read slower to be sure I understood everything. It is a bit like being dropped into an alien environment.
No mention is made of God or Christianity, but the theme of good and evil is familiar. Hyam doesn’t view himself as a hero or spokesman, but he agrees to the role of emissary because it’s the right thing to do, even if he loses his life, as he expects he will. I am reminded of Isaiah: “Here am I. Send me.”
I recommend Thomas Locke’s Emissary.
Posted by Terri at 12:00 AM