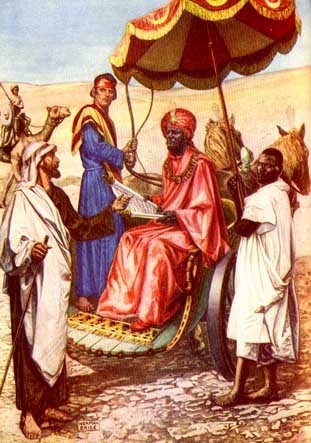 Don’t you sometimes wish the Bible writers had provided a bit more detail? “The Lord suddenly took Philip away” and he “appeared at Azotus.”
The eunuch, we’re told, went on his way rejoicing, but don’t you think he must have wondered? “Now where’d he go? Didn’t even say good-bye.”
What must have that been like for Philip? He didn’t have the benefit of growing up watching I Dream of Jeanie and Bewitched, or any sci-fi movies.
What did he think when he suddenly found himself in Azotus? Where did he find himself?
Maybe he was suddenly walking down a road, startling any passers-by. How did he feel? A little off balance? A little queasy?
Or maybe he was zapped into a market place. Imagine what a shop keeper must have thought when Philip asked, “Excuse me, what town is this?”
An angel of the Lord had told him to go south to the desert road. Did Philip know he should take along any belongings?
Philip, what was it like?
Posted by Terri at 12:30 AM