Imagine living in the peaceful tapestry of farmland in East Anglia, in England's southeast corner. Winding roads, stone walls, sheep and cattle grazing. Buildings that are a couple hundred years old are considered new.
England is at war with Germany, and an invasion by the Germans is likely. They don’t invade, however. The Americans do.
The peaceful country quiet is shattered by the roar of thousands of engines. The vibrations of those engines caused everything is the homes to rattle and jingle. The Americans have arrived. 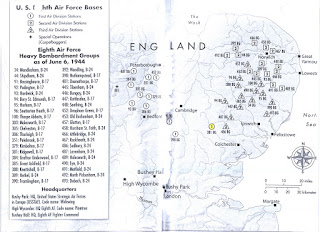 Forty-four Bomber Groups and fifteen Fighter Groups settled in, usually just three to five miles apart. On average, an American base can be found every eight miles in a province about forty miles by eighty miles, the size of Vermont. They came to East Anglia because of considerable open spaces and level terrain. Additionally, they are comparatively close to the European mainland.
The airplanes didn’t come on their own. So did thousands of young American men. They’re friendly, girl-crazy, brash and loud. Their manners are informal; they commit the social taboo of approaching strangers to chat. From a relatively young nation, they lack the history and traditions of England.
The British have been suffering from war deprivation for years, and the young Americans bring fun and liven up their dreary lives. The Americans possess never-ending supplies of chocolate, cigarettes, Coca-Cola, and chewing gum. “Got any gum, chum?”
Early in the mornings, wave after wave of four-engine bombers takes off from the midst of this farmland. In good weather, the planes take off in thirty second intervals; in bad weather, the interval is one minute. They climb heavenward in predetermined flight patterns to their assembly altitude and home in on the Bomb Group’s radio beacon. Assembly takes about an hour—a prolonged wake-up call.
With so many planes taking off in such close proximity, accidents happen. Any deviation in course, rate of climb, or airspeed can put airplanes heavily loaded with bombs and fuel on collision courses. They are flying were no air traffic control and they are under radio silence. In-flight accidents during assembly claimed five percent of aircraft lost during the war. Each bomber held nine or ten men. The wreckage all rained down on the English farmland and homes. 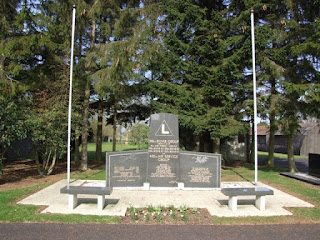 The British never forgot the young men who came to help after England had stood alone against the Axis for so long. 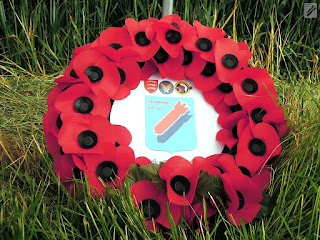 Memorial wreath commemorating the 70th anniversary of
the 24 killed in a bomb loading accident,
laid by Ridgewell residents and museum volunteers.