The Secret of the Sinking of U-456


That big manila envelope came from the U-boat flotilla commander’s headquarters in Brest, France. Erich’s base. Why would headquarters be contacting her?


Heidi’s breath stalled in her throat as a prickling sensation bloomed in her stomach, and she fought a wave of dizziness as she reached for the envelope as though it might bite. It could do worse than bite. It could tear apart her world. Her fingers trembled as she loosened the flap and extracted a document. Standardized words adorned the page.


true to his oath to the flag


he died in battle for


the freedom of greater germany


Beneath the grandiose announcement, Erich’s name appeared with the date May 12, 1943, followed by, “he died a hero’s death for führer, folk and fatherland.”


Heidi’s hands flew to her mouth, and the document fluttered to the floor. …


A second letter caught her eye, also from Brest. It bore the sender’s name as Helmut Keller, Erich’s good friend. Her heart beat stuttered, and she fought another wave of dizziness. Helmut had no reason to write to her. Stealing a glance at the vile document lying on the floor, she picked up his letter. Tears filled her eyes as she prayed he wrote to inform her of a mistake. Erich’s U-boat had returned to port after all.


But then why didn’t Erich write to her himself? Unless he was wounded. She ripped open the envelope.


Dear Heidi, I am so sorry to tell you…


She sank to the cold hardwood floor, a moan escaping from deep within her. Pain squeezed her like a python. Her lungs struggled to inhale. Erich, oh, Erich, come home. Please come back home to me. How can I go on without you?


She focused tear-filled eyes on the letter.


We heard U-456’s radio messages. They weren’t clear for diving, but an enemy aircraft kept them in sight. They reported a leak in the after compartment and urgently requested help. Then came U-456’s final message: ‘Diving. Cannot stop. Heil Hitler.’


Erich was an excellent friend.


Was an excellent friend. Past tense. Helmut believed Erich dead. She crumpled the letter. How terrible had it been for him? The wounded U-boat diving straight down, unstoppable. When it reached crush depth, it imploded, crumpling like a tin can. And the men in it? Bile rose in her throat, choking her. Hunching over, she rocked back and forth while tears streamed down her cheeks.  Her heart picked up its pace, but she still couldn’t breathe. No, God, no. Don’t let it be true. Please. No.


Did the men of U-456 have to die? Would surrender have been so bad? Why had the skipper ordered a dive with the boat so badly damaged? Had Erich objected? Or had he been wounded? She’d probably never learn the answers to the questions that haunted her. 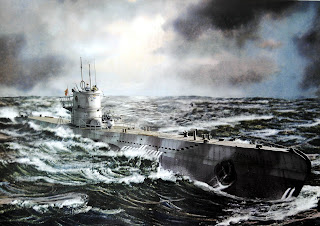 The above excerpt is from Friends and Enemies, my debut novel. Heidi never learned what really happened to U-456. No one in Germany learned until after the war that a new top secret weapon had caused the submarine’s demise.
Adhering to the actual timeline of events is important to me. To determine the starting point for the novel, I studied U-boat losses in 1943. I wanted a sub that went down in the Atlantic. May of ’43 was known as Black May for the Germans. Forty-one U-boats were sunk, and thirty-seven damaged. When I clicked on U-456 on my favorite U-boat website, I found my sub.
Why did U-456 sink? It had been caught on the surface by a Liberator piloted by RAF Flight Lieutenant John Wright. They carried a Mark XXIV Mine. The Mk.24 was an airborne anti-submarine acoustic homing torpedo.
The Mk.24 could detect, track, and impact a source of underwater noise―a U-boat’s propellers. It was so secret that it could only be used out in the Atlantic where it wouldn’t run ashore. It was to be released only after a U-boat had dived or was diving with the conning tower hatch closed, so the enemy would not see this new weapon. Surface ships were not to be in the vicinity, as their propellers might deflect the Mk.24.
On May 12, the U-456 dove when the Liberator approached. No surface ships were around, so the Mk.24 was released. The Liberator circled, and two minutes later a brownish patch appeared on the ocean. The U-boat resurfaced and took off at a high speed. The Liberator dropped depth charges that did missed the submarine, and the crew called for surface support while it maintained watch.
At 1130 hours, U-456’s Commander Max-Martin Teichert sent a distress call to U-boat Headquarters. am not clear for diving… aircraft is keeping contact. urgently request help. Twenty-one minutes later: bad leak in after compartment, need help urgently.
Another U-boat was ordered to assist, but it was sunk first.
At 1640 hours, a destroyer raced toward the U-456. Teichert dove his damaged boat. The secret new weapon had done its job. U-456 went straight down.
And Heidi Wetzel became a widow.
Posted by Terri at 12:00 AM