The 1936 Olympics provided Hitler with the opportunity to showcase to the world the fabulous society he and his Nazis were creating for Germany. Not only would the world see beautiful Berlin and the comfortable German lifestyle, everyone would see his athletes were prime specimens of Aryan superiority who would win all the gold.
Except, they didn’t win all the gold. Gasp! A black man, American Jesse Owens, beat the Aryan supermen in a footrace.
Furious, Hitler…
A.   Congratulated the winner.
B.   Stormed out of the Olympic Stadium.
C.   Neither of the above.
He stormed out of Olympic Stadium so he wouldn't have to congratulate Owens, right?
Wrong!
That would seem to be perfectly in character for a man known to rant and rave, but it is a myth.
During the first day’s competitions, Hitler did congratulate the German winners. Members of the Olympic Committee took him to task. He was supposed to maintain Olympic neutrality. Either congratulate all winners, or none. He chose to honor none.
Hitler did walk out as a black American athlete was about to be decorated, but it was Cornelius Johnson, not Jesse Owens. A Nazi spokesman claimed Hitler’s leave-taking time had been pre-scheduled. 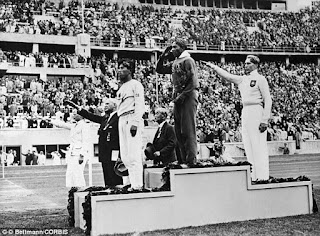 As it happened, Jesse Owens received several thunderous ovations from the captivated German audience. They gave him the greatest ovations of his track career, chanting “Yesseh Oh-vens” or just “Oh-vens.” He was mobbed by autograph seekers.
The German athletes won more medals than all the other countries combined. Hitler and the Nazis were well pleased with the outcome. Jesse’s four gold medals (in the 100 meter, 200 meter, 400 meter relay, and long jump) were a minor embarrassment that couldn’t overshadow the huge public relations coup the Nazis had pulled off, casting Germany and the National Socialist Party in a positive light.
So who snubbed Jesse Owens? His own president. Despite ticker-tape parades for Owens in New York City and Cleveland, President Franklin Delano Roosevelt never publicly acknowledged Owens’ achievements. Owens wasn’t invited to the White House; never received a letter of congratulations from the president. Not until 1955 did President Dwight D. Eisenhower honor Owens by naming him “Ambassador of Sports.”
Posted by Terri at 12:00 AM