I love the story told by the National WASP•WWII Museum.
The B-29 Superfortress had been rushed into production without the years of testing usually required. Pilots of the time called the Wright engines the “wrong” engines. They were prone to engine fires on the runway and sometimes after takeoff. 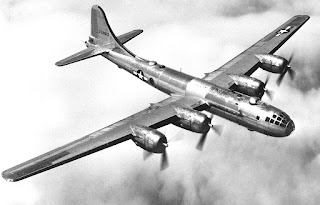 In February, 1943, a B-29 crashed into a meat-processing factory and killed nine crewmen and nineteen civilians. The death of Eddie Allen, Boeing’s ace test pilot, spooked other pilots. Lieutenant Colonel Paul Tibbets, assigned to train pilots for the B-29, had a problem. The men he had chosen didn’t want to fly the Superfort.
The Superfortress had been developed to carry the atomic bomb. Tibbets had to find willing pilots. He got an idea. The men would be shamed into flying the B-29 if he got women to fly it.
He showed up at Elgin Air Force Base in Florida and walked into the lounge of the nurses’ barracks. DiDi Moorman was reading a magazine. He asked her, “Do you have any four-engine time?” When she stared at him, speechless, he added, “I’m looking for two WASP to check out in the B-29.”
None of the WASP at Elgin had four-engine experience; just a bit of two-engine training. DiDi, recognizing the huge opportunity, told Tibbets that Dora Dougherty was checked out in the two-engine A-20 light bomber.
Tibbets tabbed DiDi and Dora to fly the B-29. He gave them just three days of training before their demonstration flight. That was unheard of. The regular training program for the B-29 required six months of training, two years toward an Aeronautical Engineering degree, and fifty hours of flight time in a converted B-24 bomber. Even with that, many of the men washed out.

DiDi and Dora succeeded because they were highly motivated, well trained, and carried out Tibbets’ instructions precisely. He taught them techniques which reduced the possibility of engine fires, and in fact, did not tell them of the engine problem.
When a fire did start during a training flight, Dora calmly followed procedures and landed the plane safely. For a few days, Dora and DiDi ferried pilots, crew chiefs, and navigators from the base in Alamogordo, New Mexico, to other bases.
Tibbets’ plan worked. The men stopped complaining and started training. The B-29s went on to help win the war in the Pacific, thanks to the women showing the men how it was done.