The First Shot of the War in the Pacific


The first shot of the war in the Pacific on December 7, 1941, may not have been fired at Pearl Harbor. A new book, Dawn of Infamy, traces the history of a lumber transport ship that may have been the first ship fired on by the Japanese. The Cynthia Olson was leased to the Army Transport Service to haul lumber to Hawaii for the military build-up in response to the threat of war with Japan.
A Japanese submarine spotted the freighter on December 6 and followed it, waiting to hear the attack on Pearl Harbor had begun before firing on it. Because the transport was unarmed, the Japanese commander made the humanitarian gesture of firing across its bow and allowing the 35 men to abandon ship into their lifeboats. 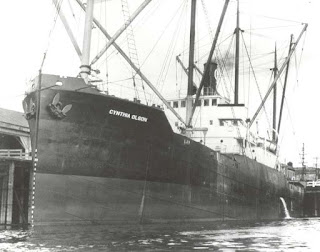 The men, mostly Scandinavian-born, naturalized Americans officers and Filipino merchant mariners, were never seen again.
The radio operator, Private Sam Ziskind, an enlisted army man, sent out a distress signal and communicated with a passenger liner, the Lurline, heading for the West Coast. The Lurline radio operator asked for their position and Ziskind responded, adding in a “steady hand” that they were being attacked by a surfaced sub. Their news was flashed to San Francisco and on to Washington, but the news of the attack on Pearl Harbor quickly eclipsed their ordeal. A Canadian coastal passenger liner requisitioned by the military did search for them, but found no trace of the ship, flotsam, or the two lifeboats.
It was a case of bad luck that the Cynthia Olson was found by the enemy. Nineteen other US-flagged ships were underway between the West Coast and Hawaii that day. Four were heavily laden troopships. Cynthia Olson made the least rewarding target. The ship, built by the Manitowoc Shipyard in Wisconsin, proved to be a rugged freighter that remained afloat for a few hours, despite having 40 rounds of high explosives fired on it.
Eleanor Roosevelt commented on the lumber ship in her regular Sunday evening radio address, and FDR made a veiled reference to it in his Day of Infamy address to congress. It received much coverage in the press, possibly because it occurred within three or four days steaming of the West Coast, but soon faded from attention and is today barely known.
Determining whether the Cynthia Olson was fired upon before bombs fell at Pearl Harbor is made difficult because of the variety of time zones. Besides Greenwich Mean Time, which the radio operators were to log their messages, the Japanese sub followed Japan’s time, the Lurline advanced its clock one half hour at midnight while underway, and Hawaii at the time was at the half hour when the mainland was on the hour.
Speculation on what happened to the crew settles on them being adrift until they starved or swamped. They are now counted among the more than 73,000 service personnel not recovered following World War II. The two soldiers, Private Ziskind and Private Davenport, the medic, are listed among service member killed at Pearl Harbor and memorialized at the National Memorial Cemetery of the Pacific, known as the Punchbowl. 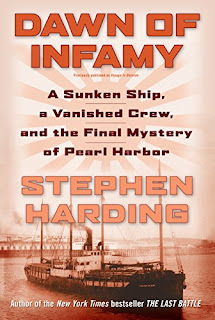