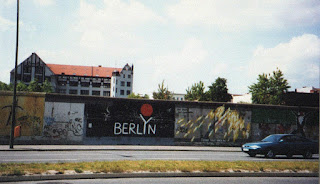 A preserved section of the Berlin Wall is now an art gallery.
Posted by Terri at 12:00 AM