If you’ve watched World War II movies about German U-boats, you’ve seen them torpedo merchant ships which explode in a huge fireball. How could anyone survive such a catastrophe?
Supply convoys consisted of slow, lightly defended ships venturing into the war zone where they were easy pickings for U-boats or German surface vessels and bombers. Guns were installed on merchant ships and manned by a naval Armed Guard, but they provided scant protection. (The Navy Armed Guard’s motto was “We aim to deliver.” Unofficially, it was “Sighted sub, glub, glub.”) The real protection came from the escort force of warships. 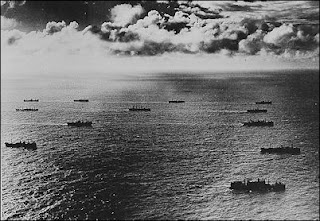 In June, 1942, convoy PQ-17 sailed from Hvalfjord, Iceland, for Archangel in North Russia, a distance of 2,150 miles, a ten-day voyage. At this time, the German battleship Tirpitz terrified the Allies. Its mere presence in Trondheim, Norway, caused the British to tie up a fleet of their warships on standby to make sure it didn’t break free and wreak havoc.
First Sea Lord Dudley Pound, Admiral of the Fleet and operational head of the Royal Navy, considered the convoys a most unsound operation. They benefited the Russians and diverted American aid from the British. They’d already lost two cruisers on convoy duty, and the threat of Tirpitz endangered more of their dwindling fleet.
On July 3, a British fighter overflying Trondheim noted the Tirpitz was missing from its anchorage. A decoded German message announced the arrival of their heavy cruiser Admiral Hipper in Altenfjord in northern Norway. Pound feared the Tirpitz was about to pounce on convoy PQ-17 and its escorts. The next day, he issued the order to scatter the convoy. 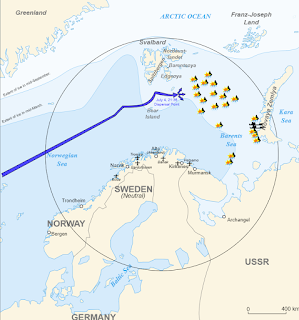 The first message sent to the convoy read, “Cruiser force to withdraw to westward at high speed.” The escorts assumed this meant the Tirpitz was fast approaching and they were to intercept it. A clarifying message read, “Convoy is to scatter.” Each ship was to head off on its own and hope to reach Russia.
The merchant mariners were stunned to watch the warships speed away. Convoy PQ-17’s escort consisted of a core escort of six destroyers and fifteen smaller ships: four corvettes, two antiaircraft ships, two submarines, three rescue vessels, and four armed trawlers. These ships would take the convoy all the way to Archangel.
A second part of the escort force had four heavy cruisers and a group of destroyers that would follow the convoy until they came within range of German bombers in Norway. Then they would turn back.
A third layer of “protection” included a British aircraft carrier accompanied by two battleships and a dozen destroyers that trailed hundreds of miles behind. If the Tirpitz attacked and came far enough west that German bombers could not protect it, the British aircraft would attack it.

That morning, the convoy had already come under attack by German bombers. Three merchant ships sank. The U.S. destroyer Wainwright had put up a 4th of July fireworks display that caused half the attackers to drop their torpedoes early and flee. Now the merchant ships were alone with only a German long-range reconnaissance plane circling, reporting their whereabouts.
SOS calls filled the airways as the Germans picked off the ships: TWO SUBS ATTACKING. BEING DIVE-BOMBED. HAVE JUST BEEN TORPEDOED. ATTACK BY SEVEN PLANES. UNDER HEAVY ATTACK.
Officers on the warships that had abandoned the merchants listened in agony. They had now learned that the Admiralty had scattered the convoy on flimsy intelligence, assuming the Tirpitz was near, and felt betrayed. Officers on one British destroyer, the Offa, had considered reporting a mechanic problem and sneaking back to protect the merchants. One recalled, “There must always be a sense of shame that we did not do so.”
The corvettes from the core escort group resented being ordered to stay with an antiaircraft ship instead of the defenseless merchants. They had reached the Russian island of Novaya Zemlya. One corvette, the Lotus, turned back to the sinking ships and rescued 81 men.
Only eleven of the thirty-five merchant ships reached Archangel. (Two had turned back to Iceland shortly after setting out.) The human casualties were surprisingly low. One hundred and fifty-three men died out of over 2,500 in the convoy. More than 120,000 tons of war supplies were lost. 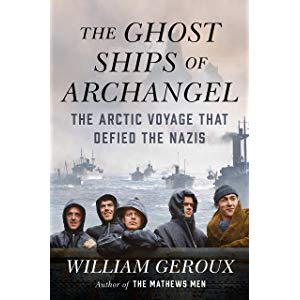 For a complete account of convoy PQ-17, I recommend The Ghost Ships of Archangel: the Artic Voyage that Defied the Nazis by William Geroux. The focus is on the three “ghost ships,” the American merchants Troubadour, Ironclad, and Silver Sword, along with the British trawler Ayrshire, that sailed into the polar ice to escape the Germans.