The Lusitania Sails in March!

In the early afternoon of May 7, 1915, the Lusitania, greyhound of the Cunard Line, fell victim to a single torpedo fired by German submarine U-20. After the torpedo exploded within the Lusitania’s hull, a second explosion rocked the ship. Whether caused by the boilers, coal dust, or contraband ammunition, the explosion ripped open a gaping hole that allowed the ocean to flow in. The Lusitania sank in eighteen minutes. 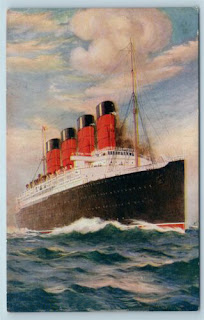 The beginning of the Great War the previous year had called all seasoned sailors into the military. Passenger liners were left with inept crews lacking familiarity with emergency procedures. The war also claimed priority on coal, causing Cunard management to close down one of the Lusitania’s boiler rooms, cutting down her vaunted speed, although this was not made public.
Concerns over sailing into the war zone were disparaged by Cunard, Captain William Turner, and the British navy. The Lusitania torpedoed? Ridiculous! The passengers were not instructed in the use of lifebelts. They were not told which lifeboat they should head for in the event of trouble.
On the day the Lusitania left New York, the German Embassy placed a notice in the papers, warning against sailing on belligerent vessels. Many passengers did not see the warning. The Germans considered the passenger liner a legitimate target, suspecting it carried contraband. And so they destroyed it.
Out of 1,962 souls on board, 1,201 perished, including 128 of 159 Americans. The war, however, was claiming millions of lives. New horrors regularly came to light, including the barbaric new weapon of poison gas. The Lusitania faded into history, better remembered for the controversies of whether it carried munitions, what caused the second explosion, and whether the British Admiralty played a part. For the passengers, the sinking was life changing, if not life ending. 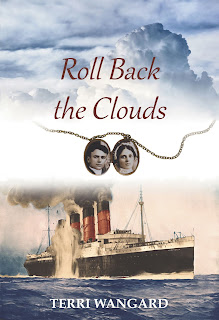 My new book, Roll Back the Clouds, releases in March.
Geoff and Rosaleen Bonnard receive a once-in-a-lifetime voyage to England aboard the fabled Lusitania in 1915. Europe is embroiled in war, but that shouldn't affect a passenger liner.
As they approach Ireland, a German submarine hurtles a torpedo into the grand ship. Rosaleen and her new friend Constance scramble into a lifeboat, but where are their husbands? She searches the morgues in Queenstown, heartsick at recognizing so many people. Geoff is finally located in a Cork hospital, alive but suffering a back injury.
While waiting for him to recover, Rosaleen is thrilled to meet her mother’s family, but a dark cloud hovers over her. The battered faces of dead babies haunt her. She sinks into depression, exasperated by Geoff’s new interest in religion. Her once happy life seems out of reach.

Several of the actual passengers cross paths with Geoff and Rosaleen. In the coming weeks, I’ll introduce you to them here.