Roll Back the Clouds, my new novel about the Lusitania, releases on March 17. Many of the passengers aboard the ill-fated, final voyage appear alongside main characters, Geoff and Rosaleen Bonnard. I’ll be profiling several of them here. This week, meet Herbert and Margaret Gwyer. 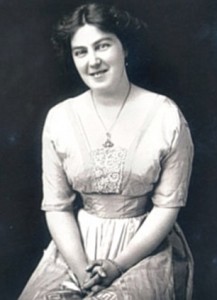 The Gwyers were British citizens living in Saskatoon, Saskatchewan. They married on April 15, 1915. Herbert was an ordained minister who had gone to Canada as a missionary. He spent most mornings and evenings aboard the Lusitania playing bridge with several male friends.
When the torpedo struck, they were at lunch in second class. Herbert and a bridge friend sought to calm the other passengers, saying everything would be alright, even though they didn’t believe that.
Herb got Margaret into a lifeboat, but she, thinking the funnels would fall on it, climbed out. Not noticing, Herb jumped into a lifeboat and rowed. When the deck of the Lusitania went under, Margaret swam away. She was sucked down one of the funnels with two men, then blown out when a boiler exploded. Two men who thought she was African because of her coating of soot helped her into a lifeboat. They made it to the rescue boat, Flying Fish, where Herb didn’t recognize his blackened bride.

In Roll Back the Clouds, Geoff Bonnard is also a victim of the funnel.