Roll Back the Clouds, my new novel about the Lusitania, releases on March 17. Many of the passengers aboard the ill-fated, final voyage appear alongside main characters, Geoff and Rosaleen Bonnard. I’ll be profiling several of them here. This week, meet Norah and Betty Bretherton. 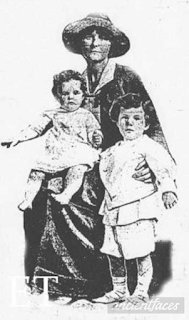 Norah Bretherton immigrated in 1910 to join her fiancé in Santa Monica, California. Five years later, she sailed on the Lusitania with her two young children because she wanted to introduce them to their grandparents. Norah was 32, her son Paul was 3, and daughter Betty was 15 months.
At the time the Lusitania was torpedoed, Norah had been on the stairs between B and C decks. She retrieved Betty from a nursery on B deck and took her up to A Deck, where the lifeboats hung. Paul was napping in their cabin on C deck. Norah failed to persuade anyone to fetch her son for her, and finally thrust Betty into the arms of a man and hastened downstairs. When she and Paul returned to the boat deck, the man no longer had Betty. It is unknown if he placed her in a lifeboat that capsized.
Norah placed an advertisement in the Cork Examiner:


Betty’s body was recovered four days after the sinking, and is buried in a convent in Cork, Ireland. 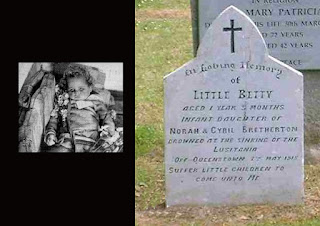 In Roll Back the Clouds, Rosaleen Bonnard, longing for motherhood, enjoys playing with babies in the nursery. Betty was one of her little friends.