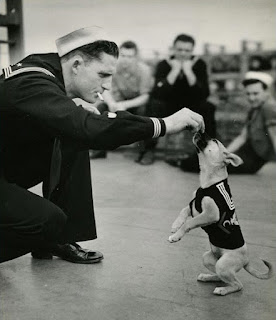 Dogs were active participants in World War II, many as combatants, helping their masters spot enemies, delivering messages and orders under fire, locating the wounded, or guarding against infiltrators and saboteurs. Other dogs served as mascots, an important role for morale, comic relief, and companionable friend. They served with airmen, marines, sailors, and soldiers.
A working dog and his/her handler spent 8-12 weeks training. Their jobs included: sentry duty, scout dogs, wire laying, pack and pull dogs, mine detection, messenger dogs, and sled dogs.
The top two preferred breeds were German Shepherds for their keen nose, power, courage, adaptability and trainability; and Doberman Pinschers, for their nervous energy, speed, power, keen nose, tractability and exceptional agility. Dobermans were the second most desired breed for scouting and sentry duty. Also accepted were Collies, Belgian Sheep Dogs, Eskimo, Alaskan Malamute, and Siberian Husky. The Eskimos, Malamutes, and Siberian Huskies were used for sledge or pack use only.
Chips, a German Shepherd Sentry Dog serving in Europe, was the first canine in military history to be awarded the Silver Star for heroism and Purple Heart for wounds received in combat, but his medals were revoked by the War Department because medals were meant for humans, not dogs. 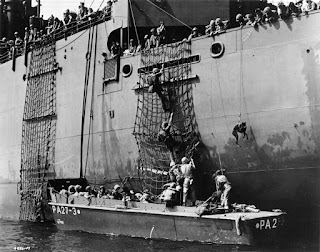 The Doberman Pinscher Club of America obtained a large proportion of the dogs enrolled with the Marine Corps. The majority of the first dogs shipped overseas (the 1st War Dog Platoon) were Doberman Pinschers; the remainder were German Shepherds. For a dog to be accepted into the Corps, it had to be one to five years old, of either gender, 25 inches high, and a minimum of fifty pounds. All dogs were tested to make sure that they were not gun-shy or timid. Marine Corps dogs were confined to scout dogs and messenger dogs.
The 3rd Marine War Dog Platoon helped liberate Guam from the Japanese. The Marine Doberman Pincers and their handlers served as sentries, messengers and scouts. Twenty-five war dogs gave their lives in the liberation of Guam and were buried there in a War Dog Cemetery with name markers.

On one night, Rex (a Doberman Pinscher) alerted to the presence of Japs in the vicinity. At daybreak, the Japanese attacked. They lost their element of surprise, because the dog had already warned of their presence. Elsewhere, Jack (another Doberman) frequently alerted on a tree near a command post. When it became light enough, a B.A.R. man shot a Japanese sniper out of the tree. This sniper could have done real damage, but thanks to Jack, the sniper was eliminated.
When hostilities ended, war dogs were returned to their civilian owners after they had undergone a complete demilitarizing process.