Malaria was a common, well-known malady that struck servicemen in World War II. Less well-known was polio.
Polio, or infantile paralysis, was thought to be a childhood disease. It conjured frightening images of crippled children struggling to walk with braces, people locked in Iron Lungs that breathed for them, and death. But polio will strike anyone, anywhere. 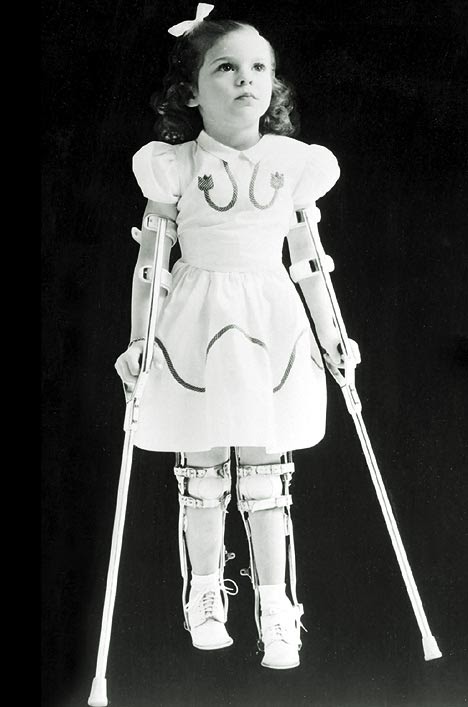 World War II saw high numbers of polio cases affecting both civilians and military, at home and abroad.
Polio’s cause was unknown in the 1940s. People believed that good hygiene and sanitation would prevent the disease. The common house fly was a suspect. After all, malaria and other diseases were borne by insects. In fact, polio spread through human feces. It flourished with poor sanitation. Ironically, the clean environment of the United States and Western countries shielded people from viruses needed to build up their immunity.
Diagnosing polio was difficult because it began by resembling the flu. Fever and headaches would soon be joined by acute pains in the legs, back, and neck.
Western Europe did not present an environment for contracting polio. Only forty-nine servicemen were diagnosed with polio in the European theater during the war. In the Mediterranean, Africa and the Middle East, the Philippines, and in the China-Burma-India theater, polio became a serious problem. Medical officers at first dismissed the possibility of polio because the native populations were unaffected. The native people, however, had developed immunity in their environment from childhood. Americans proved to be susceptible.
Compounding the problem was the availability of quality medical care. And if a victim had bulbar polio which restricted breathing and swallowing, the patient required a respirator, scarce in remote locations.

Forms of treatment had included quarantine, splinting muscles to relax them, and injections of serum taken from recovering patients, which proved to offer no benefit. In 1940, an elderly Australian nurse, Elizabeth Kenny, came to America with a new treatment. She had treated a polio patient in 1911 following the advice of her mentor: “Do the best you can.”
Her treatment for the primary symptom of muscle pain was to wrap the muscles in strips of woolen cloth soaked in hot water. She mistakenly thought the muscles were in spasms, and the heat treatment would relieve the pain. Her lack of knowledge led to a breakthrough.
The Kenny method caught on, and therapists also performed range-of-motion exercises to retrain the muscles. One problem arose with the wartime manufacturing ban on home laundry machines. The need for moist heat prompted the War Production Board to lift the ban so the Electric Household Utilities Company could provide the needed equipment.
Hydrotherapy also proved beneficial. The buoyancy of thermal water enabled patients to perform some exercises with their otherwise paralyzed limbs. The military included occupational therapy as well. Occupying the minds of wounded or paralyzed servicemen with crafts or other tasks kept them in a more positive frame of mind, rather than dwelling on their misfortune.
If the patient had the bulbar polio and his chest muscles were paralyzed, he needed to be placed in an Iron Lung, a cylindrical steel drum. The head and neck remained outside, with the rest of his body enclosed in the air-tight compartment. Pumps controlling airflow would decrease and increase the air pressure within the chamber, and on the patient’s chest. When the pressure was below that in the lungs, the lungs expanded and atmospheric pressure pushed air from outside the chamber in through the person’s nose and airways to keep the lungs filled; when the pressure rose above that in the lungs, air was expelled, mimicking the breathing. Iron Lungs were expensive, about $2,000, and they relied on electricity. Having them available in remote locations was impossible.

Having contracted the disease at the advanced age of 39 in 1921, President Roosevelt's personal quest for mobility led him to transform an old spa at Warm Springs, Georgia, into a hydrotherapy center for polio survivors. It became one of two primary centers for servicemen who contracted polio during the war. The other was in Hot Springs, Arkansas.
With the introduction of the Salk and Sabin vaccines in the 1950s, the threat of polio in the United States quickly faded.