When Britain Saved the West

In 1940, Great Britain’s defeat by Nazi Germany came perilously close. No one else stepped up to confront the Nazi threat. This is the theme of Robin Prior’s When Britain Saved the West. I was privileged to read an Advanced Reader Copy of this book that should release at the end of June. 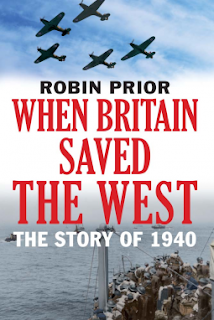 I discovered I didn’t know much about Britain’s (and France’s) experiences in the early years of war. Here is what made an impression on me.
“Peace in our time,” Chamberlain announced. He’d do anything to avoid war, even hand Britain over to Hitler.
I’d heard the prime minister gave away Czechoslovakia because Britain wasn’t ready for war. He was bargaining for time to build up his military.
Not quite. Chamberlain had vetoed equipping the army and demanded cutbacks. He was quite comfortable giving the army the role of imperial policing, and lacking any influence in world matters.
Despite knowing of the widespread massacre in Poland, all Chamberlain would do was drop leaflets over Germany. By doing so, he believed they’d win the war by spring of 1940. The Germans, he thought, were depressed by Hitler’s bullying and once they read his leaflets, they’d throw out the Nazis.
Both Chamberlain and his Foreign Secretary Lord Halifax thought negotiations with Hitler were possible, and they wanted to discuss terms for European equilibrium. Neither realized how out-of-step they were with the British people.
Churchill understood any peace with Nazi Germany would not be worth having. He would rather go down fighting than be enslaved by Germany.
The British Expeditionary Force went to France with so many unknown. They were subject to clumsy French command structure, poor planning in deployment, no radar, and no knowledge of the capabilities of the armies on their flanks. One bright spot: not all their equipment was inferior to the Germans’.
When the BEF evacuated through Dunkirk, the Germans showed a lack of coordination and energy in stopping them. Two weeks of hard campaigning through the Low Countries and France had worn them down.
France kept asking the British to send them planes. They actually had more, but because of ineptitude, disorganization, and defeatism, they sent more than twenty squadrons to North Africa. Petain told Prime Minister Reynaud if no more British help was forthcoming, he should hand power over to Petain and he’d make peace. Churchill went so far as to suggest Britain and France unite in one country. The French weren’t interested. Most Vichy government members looked forward to an imminent British collapse. Both wanted the U.S. to bail them out.
Germany’s failure to capture the BEF, failure to subdue the RAF, and their inferiority at sea led to the cancellation of their plan to invade Britain. Instead, they attacked the British people in the Battle of Britain. By bombing the civilian population, Hitler believed morale would plummet and the terrified, cowed population would demand peace terms. The Germans could win the victory without an invasion.
They began with a first phase of reconnaissance flights to test the RAF’s strength. The RAF used this time to hone their skills. Poor intelligence told the Germans they had finished off the RAF fighters. Herman Goering was an ineffective Luftwaffe leader. He had no grasp of details and spent too much time maintaining his position in the Nazi hierarchy.
London was bombed for 56 consecutive days. No country had ever been subjected to the level of aerial bombardment as Britain. Despite 13,000 killed, 18,000 severely wounded, 24,000 fires started, 40,000 homes destroyed or damaged per week, the vast majority of Londoners went unscathed. London was too big a target to destroy.
The Luftwaffe was never developed into a strategic weapon. It had too few planes and they carried inadequate bomb loads.
Churchill promised his countrymen that Germany would receive a greater measure of destruction. The Germans complain about the Allied indiscriminate bombing of Germany, but they ignore their own actions toward other countries.
Churchill continually pressed President Roosevelt for aid, hoping the United States would enter the war. Roosevelt made pretty speeches, but nothing happened. He claimed the Congress or the American people didn’t want to become involved with war. He was willing to risk a Nazified Europe. His cabinet members pressured him to do something, and the American people grew discontent with his lack of leadership. Ironically, Hitler helped Britain by declaring war on the U.S. after Pearl Harbor, believing the U.S. would declare war on Germany when Roosevelt had no such plan.
The popular view of one-mindedness between Churchill and Roosevelt was created by Churchill when he wrote during the years of the Cold War. Such a view was good for morale. His constant theme during World War II was Britain was fighting by themselves, but not for themselves alone.
Britain and France wanted the U.S. to bail them out after they allowed themselves to be militarily and politically unable to deal with Germany. Had they remained vigilant in the 1930s and paid attention to what their neighbor was up to, could the war have been avoided?
Robin Prior’s When Britain Saved the West is full of information that debunks popular myths, such as Germany bombed London because the British bombed Berlin. It is highly detailed, sometimes too much. So many names are served up during the British Parliamentary debates on what to do, reading is bogged down. Also in detailing all the units and their roles in the Dunkirk evacuation. Despite this, When Britain Saved the West is a fascinating book that sheds new light on World War II.
Posted by Terri at 2:11 PM

Email ThisBlogThis!Share to TwitterShare to FacebookShare to Pinterest
Labels: BEF, Dunkirk, RAF, Robin Prior, When Britain Saved the West: The Story of 1940