What do you know of Joseph Goebbels?
He was propaganda minister for Nazi Germany, making shrill, bombastic speeches glorifying Hitler and Nazi ways, attacking anything or anyone in disagreement. He and his wife murdered their five children and then committed suicide to follow Hitler in death.
But who was he? 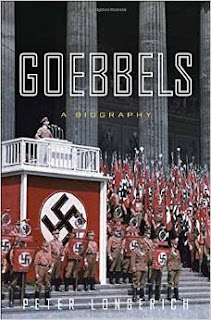 Peter Longerich has written an illuminating biography of the man who is one of the most recognized faces of the Nazi Party. Reading Goebbels: A Biography can be quite aggravating. The garbage he spews is maddening: the utter nonsense that the Jews are responsible for the war, the propaganda attack on Deputy Police Commissioner Bernhard Weiss, the denigration of anyone who doesn’t agree with him. Goebbels wrote in his diary, “It doesn’t matter what we believe in, as long as we believe.”
Some tidbits that I found enlightening:
Goebbels was a narcissist who could only be satisfied if he was recognized and affirmed by others. In 1924, he found an idol in Adolf Hitler. Though Goebbels didn’t always agree with him, Hitler could always overcome Goebbels’ doubts and keep him in line. Hitler recognized Goebbels’ psychological dependence on him and took advantage of him.
One of six children, Joseph Goebbels was born in Rheydt, west of the Rhine, in 1897. His father was a clerk, his mother a farmhand. He finished school at the top of his class. Despite money being short, he attended university, where he was a disinterested student spending more time with girls. World War I was going on, but he seemed unaware of it. Because of a club foot, he did not serve in the military.
One of his girlfriends, Else Janke, was half Jewish. She started him in his lifelong habit of keeping a diary.
During the time of chaos in the Rhineland after the war, Goebbels developed deep respect for Russia, and read extensively in Russian literature. He lost his Catholic faith, and saw himself playing a significant role in a complete cultural revolution.
In 1924, he founded a local National Socialist group in Rheydt, which talked mostly of anti-Semitism. There was widespread hope for a leader to arise, bring them out of defeat, and back to honor. He became more and more anti-Semitic, even though Else was still his lover. “I’d love to make her my wife, if only she weren’t a half-breed.”
He met Hitler on July 12, 1925, at a conference in Weimar. Goebbels was entranced. “What a voice. What gestures, what passion.” 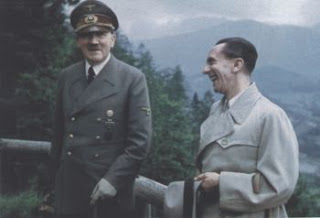 At a leadership meeting in February, 1926, Goebbels believed he could win Hitler over to his assessment of the Soviet Union, which was completely at odds with Hitler’s position. Instead, he was greatly disappointed, saying he no longer totally believed in Hitler.
At their next meeting, Goebbels was completely overwhelmed by Hitler’s personality. The contents of Hitler’s Mein Kampf were less important than the prophecy and revelation of the master. Hitler was beyond criticism.
In 1931, he met Magda Quandt. Their relationship was tumultuous. Hitler fell in love with her, causing Goebbels fits of jealousy. Hitler saw her as his ideal female opposite, and was disappointed Goebbels had spoken for her. Hitler approved of their marriage. A triangular relationship enabled him to develop an intimate relationship with Magda without harming her reputation. For Goebbels, it meant access to his idol. 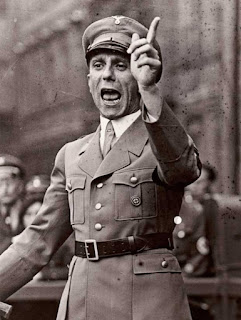 As propaganda minister, Goebbels saw his job as working on people until they accepted the Nazi influence. The new government intended to no longer leave people to their own devices. He advocated radical courses, yet he disliked crime films as “guides to crime.” All means used for the conquest of the masses were good.
The mass demonstrations in Berlin for Hitler and the Nazi’s war efforts were perfectly choreographed to portray full confidence in victory and genuine enthusiasm for the war. Factories and shops were closed at noon and the employees were herded into position.
He was not an easy man to work for. He loved making coarse jokes at the expense of underlings and humiliating them in the office. 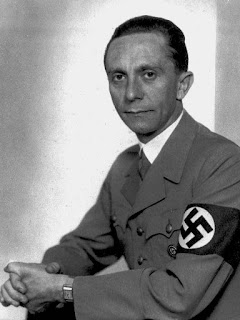 In 1936, Goebbels met Czech actress Lida Baarová. They became lovers. Goebbels wanted a ménage á trios with her and Magda. Magda complained to Hitler, Hitler demanded Goebbels break with Lida. Hitler also wouldn’t allow the Goebbelses to divorce. Goebbels: “Life is so hard and cruel.”
Hitler told Goebbels on October 6, 1939, that war in the west should be avoided now that Poland had been dissolved. The reason for England’s and France’s declaration of war was null and void. They should accept Poland’s dismemberment as a fait accompli. The future was glorious. Germany had no interest in further border revisions.
Hitler never involved Goebbels in most major domestic or foreign policy decisions. Goebbels was determined to play a pioneering role in anti-Semitic policy. He referred to the Nazi’s criminal behavior when he wrote, “When we’re victorious who will question our methods. We have done so many things that we must win because otherwise our whole nation, with us at the forefront with everything that is dear to us, would be eradicated.”
He continually exhorted Germans to make ever more sacrifices, but kept his own opulent lifestyle. As Hitler withdrew from the public, Goebbels took on the role as the regime’s main orator. He tried to commit the nation to total war, but Hitler didn’t always go along with him, permitting entertainment magazines, reopening casinos, inadequate enforcement of labor conscription for women. To Goebbels’ consternation, Hitler failed to discipline leading Nazis for failure to comply with restrictions.
By September of 1943, Goebbels began to realize the war couldn’t be won militarily. Much talk began about making a separate peace, sometimes with the Russians, sometimes with the western powers. Hitler believed Stalin’s intent of Bolshevizing Europe was Germany’s big opportunity. England and America couldn’t allow that to happen, but if they wanted to resist, they would need German assistance. Or since the Soviet Union was having very serious difficulties with the British and Americans, they could reach a deal with Stalin and then crush England with the most brutal energy. He believed the enemy coalition was about to collapse, and that would be Germany’s salvation. Goebbels suspected Hitler clung to fantasies about their defensive capabilities.

He wanted to achieve personal recognition and success at any price. Even though he was increasingly critical of Hitler in 1945 and doubted his leadership ability, he still followed him in death, because life wouldn’t be worth living if Germany lost.