In the beginning of America’s involvement in the war against Nazi Germany, all the action took place in the Atlantic and in the air over continental Europe. The army didn’t become involved in northern Europe until D-Day in June, 1944.
Several reporters covered the air was. They were dubbed the Writing 69th. In the early days of the air war, with inadequate fighter support, chances were about one in six that the airmen would no return from a mission.
The reporters found it heartrending when the men they’d spoken with earlier failed to make it back to England. Despite the high casualty rate, they wanted to experience a bombing mission for themselves. The Eighth Air Force granted their wish to the eight men who regularly covered the air bases, as long as they first went through intensive training.
Explained Andy Rooney of Stars and Stripes, “If we were going to go on a bomber in battle, we were told, we’d better know how to shoot a gun in case we got in trouble.”

Three months of training were crammed into a week. They learned gunnery, oxygen maintenance, first aid, aircraft identification, and abandoning a plane by parachute or dinghy. They were warned against removing their gloves at high altitude and taken for an orientation flight around England in a B-17. Walter Cronkite wrote his wife, “It was a real thrill.”
The B-17 Flying Fortresses and the B-24 Liberators were carrying out the American bombing missions. All the newsmen wanted to ride in the Forts. The men of the Liberators deserved recognition too, they were admonished. Bob Post of the New York Times finally volunteered to fly on a B-24.
On February 26, 1943, they made their flight. The primary target was a Bremen aircraft factory. When it proved to be cloud-covered, they continued to the secondary target, a U-Boat base at Wilhelmshaven, well-protected by antiaircraft guns and fighters.
One of the planes carrying a newsman had to turn back with mechanical problems. Two other reporters  missed the mission due to illness or conflicting orders. Five went all the way: Rooney, Cronkite, Post, Homer Bigart, and Gladwin Hill.
The bombers came under attack by German fighters for over two hours. Over the target, they flew through deadly flak. Then more harassment from the fighters as they headed back to England.
Andy Rooney’s plane suffered considerable damage. He had to help when one crewman passed out after his oxygen tank was damaged. No one was wounded.
Bob Post was not so lucky. His B-24 went down over Wilhelmshaven. Two parachutes emerged, but neither was Post. German soldiers found his body in the wreckage. 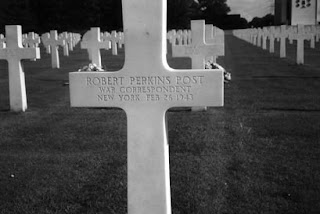 The other reporters rushed to get their stories filed. Cronkite and Rooney took part in live radio broadcasts.
Despite the danger and discomfort, Homer Bigart wanted to go on another mission. Post’s death prevented newsman ride-alongs from becoming commonplace, however, until late in the war when the Luftwaffe had greatly diminished.
How about you? Would you have wanted to ride along on a bombing mission over Germany, knowing the odds were good that you might be wounded or killed?