In 1941, as America teeters on the brink of World War II, Mary Stirling works at the Boston Navy Yard and renews an old friendship with naval officer Ensign Jim Avery. Jim’s destroyer escorts British convoys across the North Atlantic, but problems on his ship point to a saboteur at the shipyard. As Mary works to find the culprit and Jim battles U-boats, could their friendship blossom into something more? Or could the dangers they face keep them apart?
Sarah Sundin’s latest book will keep you up late to see what happens next. I like Jim Avery, but he doesn’t hold a candle to Ray Novak (in Blue Skies Tomorrow), my favorite of Sarah’s characters in her seven novels! Sarah joins us to talk about Through Waters Deep. 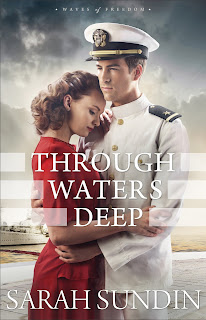 Were you affected by a childhood event that shaped your life?
Not by one, but by a series. I was bullied as a child. Add buckteeth and unfashionable clothing to my tendencies to use big words in public and to cry easily, and I was prime bully bait. As a result, I battled with low self-esteem for years. I was already a quiet child, but being bullied made me more self-conscious and withdrawn. However, it also made me more sensitive to others’ pain, and it taught me compassion for the downtrodden and the shy. Now I teach Sunday school to fourth- and fifth-graders, the same age I was when the bullying started. By sharing my stories, I help hurting kids turn to Jesus for comfort. I wouldn’t trade my experiences for the world.

Were you a Nancy Drew addict in junior high?
Ironically, no. My mother was a huge Nancy Drew fan and still devours mysteries. My younger sister is the same. I read a handful of Nancy Drews and Agatha Christies, but became frustrated with the mystery genre because I could never figure out who the culprit was! So when the idea for the Waves of Freedom series came to me with mystery subplots attached, I hesitated. But the story ideas wouldn’t leave me alone, so I learned how to write mysteries and I plowed ahead. My mom and sister are extremely amused that I’m writing mysteries. But I was thrilled when my sister didn’t figure out the villain in Through Waters Deep. Success!

Which of your characters do you most identify with (from all your books)?
As I’m writing, I identify deeply with each character. I really try to put myself in their heads and think as they think. But boiling down to the basic personality, I’m most similar to Mary Stirling in Through Waters Deep, quiet and analytical but also sensitive and dreamy. We’re both INFJs in the Myers-Briggs personality test. And yet she adores mysteries. Go figure.

Have you ever been on board a WWII-era ship? What did you think?
I have! In the past few years, I’ve explored an aircraft carrier, two battleships, two destroyers, a submarine, and a Liberty ship! I’m always impressed by the spare living and close quarters. No wasted space, no unnecessary equipment or personal items, and everyone had to do their part. As I learned about these ships and what they did, visiting these ships meant even more to me. I got a bit too excited when I had the opportunity to climb inside a 5-inch gunmount, visit an ammunition handling room, and see a real Mark 37 fire control computer. I’ve never been normal.

What is the theme Bible verse for Through Waters Deep?
Ironically, the verse I originally chose didn’t really play into the book after all. However, verses emerged when I wrote the story. For Mary Stirling, who struggles with a fear of attention, her theme verse is Matt. 5:15-16: “Neither do men light a candle, and put it under a bushel, but on a candlestick; and it giveth light unto all that are in the house. Let your light so shine before men, that they may see your good works, and glorify your Father which is in heaven.” Mary learns that using your gifts isn’t prideful when you do it to call attention to God, not to yourself. 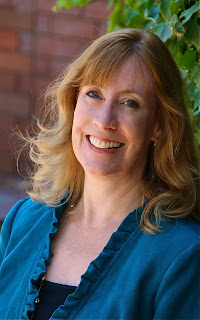 Sarah Sundin is the author of seven historical novels, including Through Waters Deep (Revell, August 2015). Her novella “I’ll Be Home for Christmas” in Where Treetops Glisten is a finalist for the 2015 Carol Award, and her novel On Distant Shores was a double finalist for the 2014 Golden Scroll Awards. A mother of three, Sarah lives in California, works on-call as a hospital pharmacist, and teaches Sunday school. http://www.sarahsundin.com
Posted by Terri at 12:00 AM