Roland Freisler was known as the hanging judge. Acting as judge, jury and prosecution of the First Senate of the People’s Court, he sent thousands of people to their deaths. He also served as court recorder, so he could compose of the written grounds for his sentences with his own notions of a National Socialist criminal court. His style of presiding in his court was to scream and shout at the defendants, humiliating them, and making them appear as common criminals. 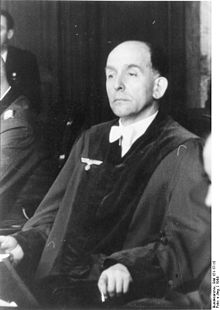 His most famous cases were the people accused of complicity in the July 20, 1944, assassination attempt on Hitler. The accused were unshaven and dressed in ill-fitting clothes from concentration camp victims. Belts and suspenders were taken away. One victim had to keep grabbing the trousers so they wouldn’t fall down. Freisler screamed, “You dirty old man! Why do you keep fiddling with your trousers?”
How did such a man arrive at this place?
Born in 1893, Freisler served in World War I as an officer cadet in 1914, and by 1915, a lieutenant. He won the Iron Cross of both classes. In October 1915, he was captured by the Russians. As a prisoner in Russia, Freisler learned Russian, and is said to have developed an interest in Marxism after the Russian Revolution. He was appointed as a commissar for the camp’s food supplies.
After the prisoner camps were dissolved in 1918, Freisler was said to have been a convinced Communist, although this is unsupported. Freisler denied the accusations, but he never escaped the stigma of being a Bolshevik.
He became a Doctor of Law in 1922, and joined the Nazi Party in July 1925, where he served as defense counsel for Party members who got into trouble with the law. One person opined that he was “unsuitable for any leadership post, since he is an unreliable and moody person.” He represented the Reich Ministry of Justice at the Wannsee Conference in January, 1942, when the plans of the Final Solution, the murder of all European Jews, were made.
He was never appointed to cabinet, because he had no influential patron, and his younger brother, Oswald, appeared as the defense counsel in trials which the Nazis wanted to use for propaganda purposes. When Goebbels proposed Freisler to replace the Reich Justice Minister, who had died, Hitler allegedly retorted, “That old Bolshevik? No!” 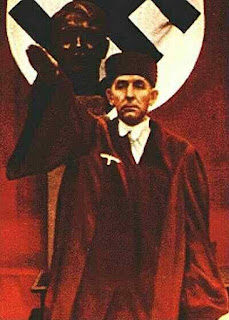 In August, 1942, Hitler promoted named Freisler to serve as president of the People’s Court. This court, set up outside the frame of law, allowed Freisler to run roughshod over legal niceties. He had jurisdiction over a broad array of political offences, like black marketeering, work slowdowns, and defeatism. The People’s Court almost always agreed with the prosecution. The number of death sentences rose sharply under Freisler’s tenure. Being brought before it was equivalent to a death sentence.
One of his victims was a Catholic priest, Joseph Müller, who told a joke. The joke itself did not bring about Müller’s conviction. His work with youth raised Nazi ire. His beliefs contradicted Nazi dogma.
Throughout the trial, Freisler ranted and raved blasphemously, even helping witnesses find appropriate words of scorn. He screamed accusations of collusion, hostility, and intentional undermining the German people’s will to carry on the war. The only expiation for Müller’s sin: death. Müller was guillotined on September 11, 1944, and his family received a bill for the cost of the execution.

On February 3, 1945, during a Saturday session of the People’s Court, American bombers attacked Berlin. Government and Nazi Party buildings were hit, including the People’s Court.
According to one report, Freisler adjourned court and ordered that day’s prisoners to be taken to a shelter. He paused to gather that day’s files. Freisler was killed when a hit on the building caused him to be struck down by a beam in his courtroom. His body was found crushed beneath a fallen masonry column, clutching the files.
One foreign correspondent reported, “Apparently nobody regretted his death.” Luise Jodl, the widow of General Alfred Jodl, recounted years later that when Freisler’s body was brought in, a worker commented, “It is God’s verdict.”
Freisler is buried in his wife’s family’s plot in a Berlin cemetery, but his name is not shown on the gravestone.