The Duke of Windsor and the Nazis


As the Prince of Wales, Edward Windsor had a sobering experience in World War I. He believed politicians created the conflict between ordinary Germans and British who had much in common. The sights he saw influenced him in the future.
His father, King George V, changed the family name from Saxe-Coburg und Gotha to Windsor in July, 1917. Also that year, the Titles Deprivation Act stripped Britain’s enemies of any rank and honor in Britain. Many German royals were related to the Windsors. Emperor Wilhelm II was the grandson of Queen Victoria.
In 1933, Adolf Hitler was keen to promote marriage between Edward and Princess Friederike, the daughter of Duke Ernst August II of Brunswick and his wife, Duchess Viktoria Luise, the only daughter of Emperor Wilhelm II. Hitler wanted marriages between German aristocracy and other European royals to improve Germany’s international position. The German aristocrats offered respectability to the radical Nazi regime. They showed the traditional ruling class had faith in the new order. 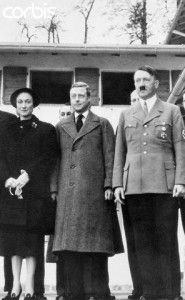 As relations with Germany deteriorated, Edward abhorred the idea of another war. He had little faith in the French and he despised the Soviets for murdering his godfather, Czar Nicholas II. He admired Hitler’s efforts to improve Germany, especially in providing employment and housing for the working class.

After he  married divorcee Wallis Simpson and they lived in exile in France, they visited Germany. Edward wanted Wallis to experience a royal tour. Their tour was a propaganda coup for the Nazis. They looked upon him as a friend of Germany, fluent in their language and with deep affection for the country where so much of his family lived. Edward made no secret of his sympathy and understanding for the Nazi regime, bringing order out of chaos. 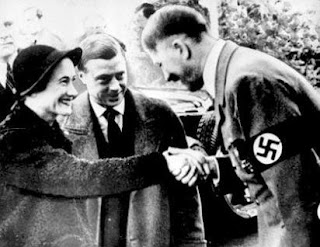 When war came, Edward wanted a negotiated peace. He believed if he had remained king, there would have been no war. He envisioned himself as the leader of a world peace movement. He wanted to return to England, but was unwelcome. The Windsors had homes in Paris and southern France. With France falling to Germany, they went to Spain before continuing on to Portugal. He was offered the governorship of the Bahamas, which he saw as being shoved out of the way.
The Germans wanted to detain them in Spain, and after Edward arrived in Portugal, they tried to lure him back to Spain, using the Spaniards as middlemen. Edward was offered a palace in Ronda where they could sit out the war.
The Germans envisioned using him as a peace broker, appealing to the British to lay down their arms. The only obstacle to peace, according to them, was the Churchill clique. Once they had Britain in their pocket, they could put Edward back on the throne as their puppet king.
The Nazis were willing to detain him by force, if necessary. Rocks were thrown at their windows to frighten the Windsors. He was warned of danger in the Bahamas; the British wanted to assassinate him.
In the end, the British got the Windsors to the Bahamas.

Email ThisBlogThis!Share to TwitterShare to FacebookShare to Pinterest
Labels: Duke of Windsor