Some publishers frown on using brand names in novels. Some businesses don’t take kindly to the use of their copyrighted brands.
But what about in a historical novel? Many products available in the past are no longer available. Others are, demonstrating their longevity.
In my third book, Soar Like Eagles, the Red Cross doughnut girls provided free Milky Way and Baby Ruth candy bars in addition to doughnuts. I used the names. My first publisher crossed them out. I had to resort to chocolate caramels and nutty bars. Sounds clumsy to me. With my new publisher, Celebrate Lit, the names are back in.
The Baby Ruth candy bar started out with controversy. The Curtiss Candy Company was located a few blocks from Wrigley Field in Chicago. The Chicago Cubs didn’t have a good year in 1921, nor did the candy company. Otto Schnering reformulated his Kandy Kake into a chocolate-covered candy bar with peanuts, nougat, and caramel. He gave it a new name: Baby Ruth.
That fall, New York Yankees slugger Babe Ruth was the biggest name in baseball. The candy bar had one letter different, but the similarity suggested a connection, and Baby Ruth hit a home run for Schnering.
The baseball player licensed his name to the George H. Ruth Candy Company in 1926. The candy company registered “Ruth’s Home Run Candy” with the U.S. Patent and Trademark Office. The Curtiss Company sued for infringement, saying their bar was actually named for Ruth Cleveland, daughter of President Grover Cleveland who had been born thirty years earlier in 1891. 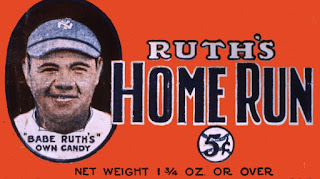 When Cleveland returned to the presidency in 1893, much interest centered on his “Baby Ruth,” but the Clevelands guarded their privacy and refused requests for photographs of their daughter. Ruth died of diphtheria in 1904, seventeen years before the candy bar’s appearance.
Curtiss’ story sounded flimsy, but the government agreed, and Babe Ruth was ruled to be trying to profit on the similarity of his name with the popular Baby Ruth. Ironically, the legal battle served to strengthen the candy bar’s connection to baseball. In 2006 Baby Ruth became “the official candy bar of major league baseball.”
Posted by Terri at 9:19 AM