Doors Open took place earlier this month in Milwaukee. Dozens of buildings were open to the public, both new and old. I formed my itinerary featuring old buildings like City Hall, Turner Hall, and Pabst Theater. One building I longed to visit wasn’t featured: the Germania Building.
It lay within my tour area, however, so I did get up close. No wonder it wasn’t included. It’s being converted into apartments.
George Brumder built the Germania in 1896 to house his growing publishing company. His was the largest German-language publishing company in the nation. The eight-story Germania was the largest office building in the city. The building appears in my current writing project, and may play a part in a future work, depending on the time frame I set. 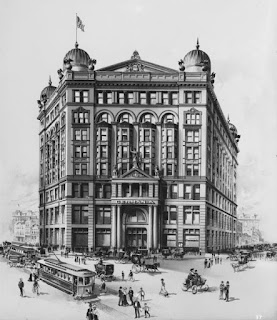 The Germania is listed on the National Register of Historic Places. It derives its significance in “its representation of the financial success and widespread influence of a business which astutely served the marketplace in a period of Wisconsin’s history when the national language of the immigrant rivaled English in its importance to communication and the socio-cultural characteristics of communities.”
By 1880, Milwaukee was home to twenty-seven percent native Germans. In some areas, German was the predominant language. Signs in shop windows read, “English Spoken Here.” The city boasted German schools, churches, clubs, theaters, and beer gardens.
The Germania sits on a triangular intersection and is a pentagonal shape. It is a Classical Revival style dominated by elements of Beaux-Arts with Germanic tendencies. The four main corners of the roof feature copper domes with a spike finial. During World War One, these were called Kaiser’s helmets because of their resemblance to pickelhaube, the German war helmets. 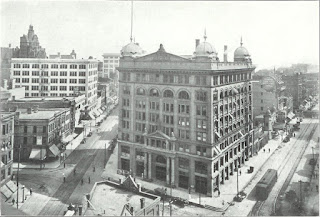 A ten-foot tall, three-ton bronze statue called Germania stood atop the three-story pavilion that frames the main entrance. Because of the anti-German war hysteria, the statue was removed. The building’s name was changed to the Brumder Building in 1918.
In the years before America joined the war on the side of the Allies, the German press offered news from the German side of the war. Relief funds were raised for Germans. By 1917, the government monitored the German community, concerned about German-Americans’ loyalty. Many German-language newspapers went out of business. People Americanized their names.
Another war brought grief of a different sort. In 1968, fourteen anti-war activists broke into the Select Service office housed in the Brumder Building. They stole thousands of draft cards, took them across the street, and burned them as protest against the Vietnam War. 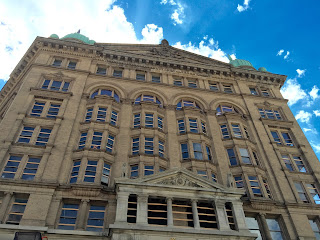 Not until 1981 did the Germania Building regain its former name. And the statue has disappeared.
One previous owner said it well. They don’t make buildings like this anymore.