I've been reading The Extinguished Flame, about Olympic athletes who lost their lives in World War One. One man's experiences stood out for me.
Jean Bouin was born on 24 December 1888 in Marseille, France. His father died shortly after his birth and his mother remarried a man by the name of Galdini, whom Jean never got along with. Jean enjoyed most sports, especially fencing and gymnastics. In 1903, he met a famous French runner, Louis Pautex. Pautex saw something special in Bouin, and agreed to train him.
Jean won his first race on February, 28, 1904, a 10,000-meter cross-country event. Throughout the year, he won fourteen of the seventeen races in which he ran.
Beginning in January of 1905, Jean ran in his first race outside of the Marseille district. Running in the 11 km Lyon Ayçaguer challenge, he finished ninth. His stepfather then persuaded Jean to run in a race in Genoa, Italy. Jean won the race by a good distance, only to discover that his stepfather claimed his purse and spent it. Jean left home, moving in with his old school friend Joseph Granier and his sister Rose, whom he later married.
He continued to win races and, after finishing first in the 18km Nice-Monaco race, he was selected to run for France in the 3-mile race during the 1908 Olympic Games in London. The French team came in third, and Jean broke the French record. As punishment for an unauthorized night out, however, the French federation refused to recognize the award of the bronze medal or Jean’s record.
In 1909 Jean became France’s cross country champion, and again in 1911 before going on to become the World Champion. That November, he set the first of his world records, in the 10,000 meters. The record stood for ten years.
In 1912 he returned to the Olympic Games in Stockholm, Sweden. Running in the 5,000 meters, Jean won the silver medal, beaten for the gold in the final second of the race by Finnish runner, Hannes Kolehmainen. 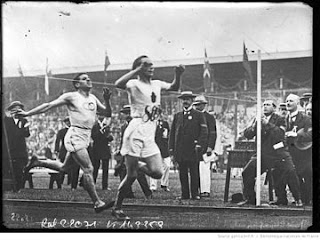 On August 2, 1914, Jean was mobilized into the 141st Regiment in Nice. He could have remained behind at the base in a training capacity, but he refused, insisting on going to the front with his regiment. Jean Bouin was killed by shrapnel during a French bombardment on September 29, 1914, during the last days of the first battle of the Marne. He posthumously received the Military Medal.
A great French hero, all of France mourned his death. In his will, Jean left everything to his wife, Rose. However, his stepfather challenged the will, demanding that all Jean’s property be handed over to him. After a lengthy legal process, Rose was finally awarded Jean’s effects.
As one of France’s greatest athletes, several sports stadiums and races named after him.
.
Posted by Terri at 12:00 AM