The creative director had married a Jewish woman and refused to divorce her. They faced escalating anti-Semitism in Berlin, and were happy to move out to the lake. Life wasn’t easy there. To the northeast lay an airfield. Built as a training facility for the rapidly expanding air force in 1935, Berlin-Gatow was a target for bombers. Electricity and water services were disrupted. The people drew their drinking water from the lake, despite dumping their sewage in the lake. Food supplies ran low. With temperatures below freezing, they had to bundle up in multiple layers of clothing and blankets.
The war ended, and the Soviets came. They stole belongings, raped women, and requisitioned homes. This side of the lake was in the Soviet zone of occupation. The creative director and his wife decided they would be safer in Berlin.
The composer and his family returned from Austria in the fall of 1946. Since their apartment was in ruins, they moved into the lake house. Now he was able to buy the property. By the following summer, their apartment repaired, they returned to Berlin.
When the Soviets blockaded West Berlin, the airlift began. Gatow airfield lay in the British sector, and the constant roar of planes over Groß Glienicke commenced. The cottage remained vacant much of the time, as the roads were in terrible condition, crossing the British and Soviet checkpoints was difficult, and the shortage of gas made its price prohibitive. 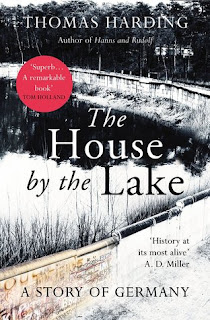 Then, in 1952, the border between West Berlin and East Germany was closed. If anyone wanted to own property in East Germany, they had to live there permanently. Unable to visit any longer, the composer invited a widow living next to the cottage with her two children to move in as caretaker.
Now, a fence of thin wooden posts and chicken wire ran along the lake’s edge. Children had no trouble climbing over it to swim in the lake. In winter, the summer cottage remained cold, and the family spent most of their time in the kitchen with the only source of heat.
Housing was scarce in East Germany, and families were ordered to share their homes. So in 1958, a truck driver and his growing family moved in with the widow. The widow and her son had three bedrooms, the kitchen, and the bathroom. The trucker’s family had the living room, the master bedroom, a small bedroom, and the chauffeur’s room and toilet, reached from outside and with no hot water. The trucker had building experience, and added a chimney in the chauffeur’s room, turning it into a kitchen. The two families had little contact, and didn’t become friends.
Besides his trucking job, he also served briefly as a Stasi informant. That didn’t last long because he didn’t provide worthwhile information and didn’t appear trustworthy.
In 1961, the Berlin Wall was built. Over three and a half million East Germans had emigrated to West Germany since 1949. The exodus had to stop. Now, besides the fence along the lake shore, another fence was erected thirty meters away, only ten meters from the cottage. Trees, pump houses, everything was cleared away. In between was a no-man’s-land which was patrolled hourly. The lake was no longer accessible to the lake residents.
The widow’s son married and began a family. The cottage was too small for two growing families, so the widow and her family moved out in 1965. The trucker’s family was pleased to take over the whole house with its kitchen, bathroom, hot and cold running water.
They had to be careful in what they did, what they said. In school, the children were asked what radio programs they listened to. If they listened to western programs, they could be reported to the Stasi.
The trucker drank heavily, and abused his wife. They finally divorced in 1986 after the children were grown. He remarried the following year. His new wife brought her seven-year-old grandson.
In 1989, the Wall came down. Former residents came back, trying to claim their property. The composer tried to get the lake house back. His claim was denied because the property had been seized in the Nazi era from Jews.
The trucker died in 1999. His widow moved to an old people’s home. Her grandson, now nineteen, now occupied the cottage. He invited a friend to join him. They spent much time drinking, doing drugs, and playing video games. The house became untidy and unkept. In 2003, the grandson was evicted when the city of Potsdam absorbed the land. The site would be redeveloped.
For several years, the house was vacant, except for vagrants and foxes. The composer’s son tried to claim the property, but because it had been acquired during the Soviet era and because the property had been aryanised, the claim was rejected.
A great-grandson of the Jewish doctor, Thomas Harding, visited the house in 2013. Since then, he worked to save the house from demolition. It is now cleaned up and open to the public as a place of commemoration of German-Jewish history on the shores of Groß Glienicke Lake.
Posted by Terri at 12:00 AM